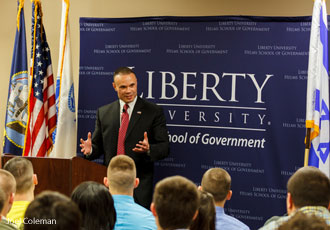 Dan Bongino, who spent 12 years in the Secret Service, spoke to students at Liberty University’s Helms School of Government on Friday about his distinguished career in law enforcement and government intelligence. After beginning in the Secret Service investigating bank fraud and computer crimes, Bongino moved to Maryland, where he currently resides, to instruct at a Secret Service training center. Within seven years of his time with the Secret Service, Bongino advanced to work with the elite Presidential Protective Division in the administrations of President George W. Bush and President Barack Obama. Bongino will be running for Congress this year.

Bongino told students what prompted him to enter the field of criminal justice. He said after experiencing a difficult childhood, he admired the impact police officers had in keeping criminals in their place, which helped influence his decision in joining the New York Police Department beginning in 1995.

In addition to sharing some of his background with students, Bongino encouraged them to not take their liberty for granted and to make an impact in their communities.

After the lecture, Bongino spent time answering students’ questions and signing his book, “Life Inside the Bubble,” about his time in the Secret Service and his decision to run for political office.

“Mr. Bongino is a unique person and a great spokesperson for all of the disciplines that we have here in the School of Government,” said Ron Miller, associate dean. “The Secret Service experience he brings to share with our students is unique.”