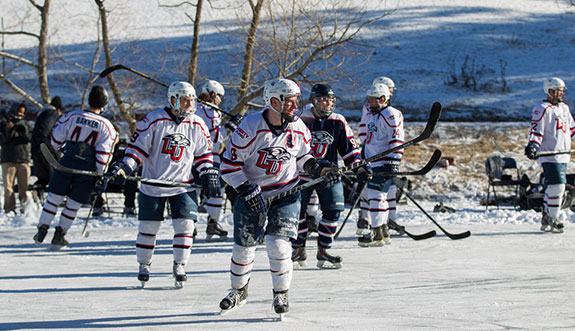 Thanks to the recent cold snap, and the hospitality of Liberty University President Jerry Falwell, Jr. and his family, members of the ACHA Division I men’s hockey team had the chance to visit the Falwell family’s Bedford County farm and hold a makeshift scrimmage on their frozen lake on Wednesday.

While the majority of the residential student body was in Convocation, they got proof that the team was indeed playing hockey, and not hooky, when video shot by School of Communication & Creative Arts students was streamed into the Vines Center.

The friendly morning “shinny” in full uniform and gear was a refreshing mid-week getaway for Flames, who are ranked No. 3 in the country.

“A lot of the guys on our team grew up playing on ponds like that, so it was kind of like a throwback to our childhood,” said Liberty senior forward and captain Andrew McCombe, who’s from London, Ontario.  “I think it was just a good way to kind of hit the reset button and get refreshed and just have a lot of fun. It was just a great morning. I think the team really came together.  Any time you get out on a frozen pond, I think you feel like a kid again, no matter what.”

The Flames held their regularly scheduled practice back at the LaHaye Ice Center in the afternoon in preparation for their final road trip of the regular season this weekend at the University of Delaware. Liberty Head Coach Kirk Handy said the players made the most of the time away to enjoy their sport in a unique setting.

“It doesn’t happen every year,” he said. “It’s a neat opportunity when it does happen to go out and enjoy it and and get back to the roots of hockey. I think that was kind of the fun part for the players and coaches. And then to make it even more fun, it’s not only an outdoor setting, but it’s a gorgeous setting at our president’s house. President Falwell and his wife, Becki, were out there and all their kids were out there, so it was a good time for our players to interact with them.”