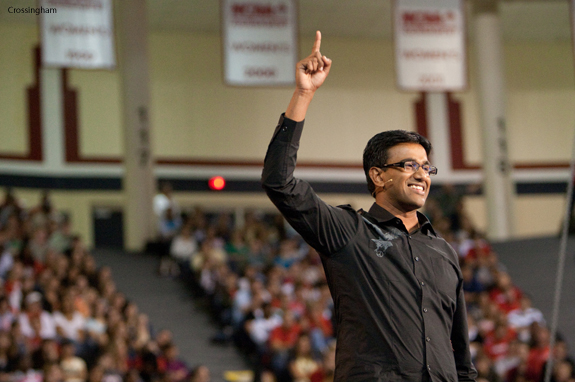 Eight years ago Sujo John stood on the 81st floor of the World Trade Center with death just minutes away. But on Friday John stood in front of Liberty University’s student body to describe his September 11 survival story and attest to God’s great glory.

John was the main speaker for Friday’s convocation, where Liberty students gathered to remember the victims of 9/11. Before he spoke, campus pastor Dwayne Carson led students in prayer for families of the victims.

John and his pregnant wife moved from Calcutta, India, to America in February 2001 seeking a brighter future. Upon arriving, John and his wife found jobs at the World Trade Center. Seven months later, at 8 a.m., John sat at his desk writing an email to a friend describing his longing for God to use him.

“Be careful when you use those words — I’ve come to learn that God reads email,” John said jokingly.

Just 40 minutes later John heard an “eardrum-bursting” sound as the plane hit his building, the north tower. After an hour of traveling down the 81 flights of stairs, he recalls gazing upon the hundreds of dead bodies at ground level, wondering when he would join them.

While on the street, John felt a sudden need to ask a group of people to call out for Jesus.

“I didn’t hear any man call on the name of Allah, or on the name of Krishna, or call upon any other God — how could they? There’s only one name and that is the sweet name of Jesus,” John said.

As he would find out later, those people did not survive.

Sure that his wife and unborn child were dead, John said he was relieved when he received a call from his wife saying she was late coming in to work and was not in the building.

After coming so close to death, John knew that his only purpose in life could be to spread the word of his Lord. Now he has started an international ministry that has taken him to 400 major cities on most of the continents of the world, resulting in the salvation of hundreds of thousands of people.

John encouraged Liberty students to spread the word of God to stop the spiritual famine that has struck America.

“I pray that by speaking to you this morning I will awaken a generation in America that will say, ‘We will stand and reclaim the old rugged cross,’ so that people can be saved.” 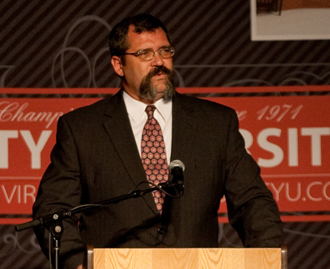 Parke recalled his experience serving in the United States Army when the terrorist attacks occurred eight years ago today. “Can you remember where you were on Sept. 11, 2001?” he asked students.

Parke called on students to pray for our country and said that our nation must return to the Lord, quoting 2 Chron. 7:13-14,19.

Dean George Buzzy closed the convocation encouraging students to take advantage of the opportunities they have as students in the Helms School to gain experience and learn leadership.

“The opportunities on this campus for you to grow up, to learn and to prepare yourself for the destination that the Lord has are here, you just need to seize them and equip yourself,” he said.