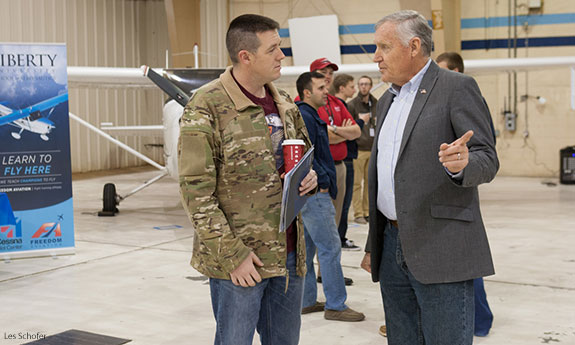 “We were extremely pleased with this weekend’s open house,” said retired U.S. Air Force Brig. Gen. Dave Young, dean of the School of Aeronautics. “It achieved our objectives as the attendees were able to visit our facilities, meet our team, and enroll in our program.”

Representatives from the Virginia Department of Aviation and aircraft manufacturing companies such as Cessna also attended the open house along with aviation education icons John and Martha King.

Responding to the growing demand for pilots around the world, the affiliate program is an innovative approach to expanding the SOA beyond its Lynchburg Regional Airport campus.

“The Newport News initiative is providing the Liberty School of Aeronautics with an unprecedented opportunity for people to fulfill their dreams of being pilots and to pursue careers in aviation who otherwise would not have had the chance,” Young said. “This initial step is just the beginning as we partner with Virginia Peninsula universities and schools, provide flight training to our military veterans and their dependents, and expand the program to other areas.”

Liberty SOA is also affiliated with the Denbigh Aviation Academy, based at Newport News/Williamsburg International. Aircraft maintenance students there receive college course credit toward their airframe and power plant certification, which is transferable to Liberty’s residential program.

Young expects the affiliate program to lead to more partnerships with SOA-approved flight schools located at airports across the U.S.

“We will work in collaboration with other universities, flight schools, and even high schools to produce a synergistic approach to producing pilots,” he said. 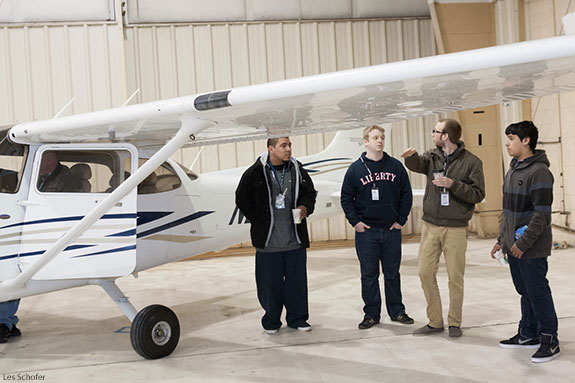 Liberty School of Aeronautics staff show off one of the Cessna aircraft to be used by students of the new
flight training affiliate program at an open house at Newport News/Williamsburg International Airport.