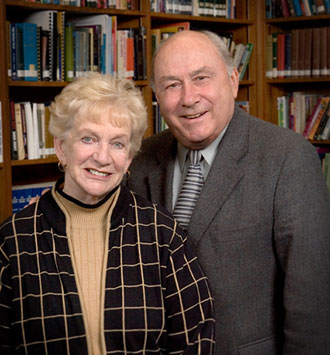 Ruth Towns, 80, a former teacher at Liberty University, died Wednesday, Dec. 11, after battling cancer for a number of years. For about 15 years she taught counseling and women’s ministry classes in the School of Religion. She was the wife of Dr. Elmer Towns, former dean of Liberty University Baptist Theological Seminary and the School of Religion.

“Liberty University is deeply saddened by the loss of one of its most dedicated, loving family members. Ruth was a prayer warrior who loved Liberty and its students. She was a remarkable woman who displayed excellence in a number of capacities: as a wife, mother, grandmother, businesswoman, leader, and as an academic,” said Dr. Ronald S. Godwin, Liberty’s provost and senior vice president for Academic Affairs. “Her deep faith allowed her to face cancer and transition to her heavenly home with great fortitude.”

Through Liberty Ruth Towns earned a B.S. in Church Ministry Education in 1985 and an M.A. in Counseling in 1989.

Dr. Elmer Towns, who co-founded the university with Dr. Jerry Falwell, Sr. in 1971, announced he was leaving for sabbatical in August.