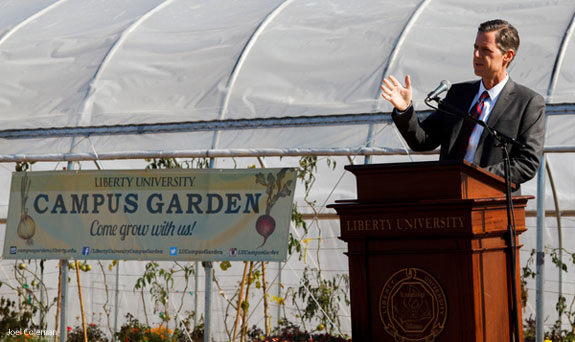 Liberty University dedicated its Morris Campus Garden on Friday and shared the fruits of its harvest with visitors as Sodexo, Liberty’s dining services provider, whipped up appetizers made from its produce.

On the menu was bruschetta, pumpkin pancakes, and hot soup, all freshly prepared, compliments of Sodexo staff.

Before the sampling was a ribbon cutting ceremony with honored guests and members of administration. The garden is located on Liberty’s mountain property about 3 miles from campus, overlooking the majestic Blue Ridge Mountains. It includes two high tunnels (a type of greenhouse) and has already grown a variety of seasonal produce. The garden is part of the many outdoor recreational opportunities offered to students through Liberty’s Student Activities Office.

The garden is named for Henry and Elvira Morris, now deceased, who both were very passionate about horticulture and were friends of Liberty founder Jerry Falwell, Sr.

“Henry Morris made it his mission to beautify Liberty University,” said President Jerry Falwell, Jr. “Even in the years before we had beautiful buildings and nice architecture and red brick, we had compliments all the time about our campus because of what Henry Morris did to make it beautiful.”

Falwell said the Morrises donated tractors, trucks, and other equipment for the grounds crew and set up a fund to meet the university’s horticultural needs for several years. They gave a number of plants, including the maple trees at the entrance to campus, and donated the university’s first greenhouse in the 1980s. The greenhouse was located near Arthur S. DeMoss Learning Center for many years before it had to be taken down to make room for the Jerry Falwell Library, now under construction and part of Liberty’s $500 million campus rebuilding project.

Chip Morris, son of Henry and Elvira Morris, attended with members of his family. He said the new Campus Garden is the perfect location for his parents’ namesake.

“Walking amid new creation, that was very special to (them),” he said. “(Liberty) has started a fabulous work here, and I am really looking forward to seeing what comes of it. It is my hope that people will understand the process of nature and that it is so much easier and better for the earth to cooperate with nature rather than try and overcome it.”

Alicia Cripe, Campus Garden manager, said Christians believe life started in a garden and people are charged with the responsibility to care for God’s creation.

“We are really passionate about the earth. We feel very strongly about being able to work it in ways that we feel good about and transferring that skill to other people,” she said, adding that the garden gives students an opportunity to explore their passion and “that connection that you get with gardening and the earth and seeing the miracle of God’s creation.”

Students — whether avid gardeners or interested novices — are invited to get involved. They have the opportunity to fulfill their required Christian/community service hours at the garden and all majors are welcome to volunteer. 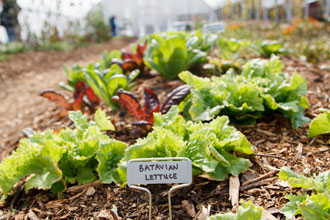 The Morris Campus Garden is more than a recreational activity for students; it is also a ministry. Half of the produce is given to Liberty’s dining hall and the other half is donated to charity. Currently, produce is donated to Lynchburg Daily Bread, a local food bank. Cripe also has plans to connect with local families in need through the university’s service projects.

“Some of the students have connections with families either through their churches or other ministries, and it’s my hope to connect with them on a more personal level, to be able to give them food when I know they really need it and it would be a huge blessing to them.”