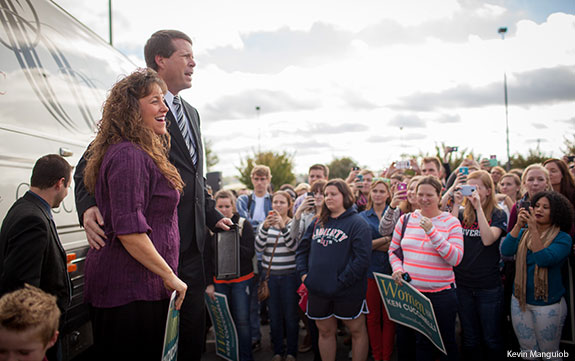 Jim Bob and Michelle Duggar — along with 12 of their 19 children, one grandchild, and their daughter-in-law, with whom they star on TLC’s hit reality television show “19 Kids and Counting” — visited Liberty University on Monday as part of a statewide three-day tour. The family is expressing support for Virginia governor candidate Ken Cuccinelli and lieutenant governor candidate E.W. Jackson.

Josh Duggar, the oldest of the children, is the executive director of FRC Action, the lobbying arm of the Family Research Council that sponsored the tour. The bus was parked at the Liberty University Barnes & Noble Bookstore for about two hours. The family greeted a large crowd of students and fans from the community. The crowd received a special treat as the Duggar children lined up and performed special music with string instruments.

This is the third time Jim Bob and Michelle Duggar have visited campus. They spoke during Liberty University Convocation on Oct. 5, 2011.

They said they enjoy the Lynchburg, Va., area, especially its people, the Christian atmosphere, and Liberty.

Jim Bob Duggar said many prominent universities have fallen away from their Christian roots.

“We appreciate Liberty and what it stands for and (how it is) sending world leaders right from this campus,” he said.

The Duggar parents endorsed the candidates and talked about issues such as health care, abortion, and the economy. They told those gathered they could each have a hand in turning the election — both with their votes and support.

“We just believe in these men,” Jim Bob Duggar said. “They both are people that stand for truth, that are not ashamed of their Christian values, and are people that we know will go in there and fight for what is right.”

The celebrity parents also shared how they emphasize their values in their own home.

“Our desire is to teach our kids No. 1 to love the Lord and No. 2 to love others,” Michelle Duggar said. “As we instill that in them … we say it is a privilege to live in the United States of America. We tell our children, when you are old enough to vote, it is your duty to get out there and to know the candidates to know what they stand for. We say ‘duty is ours, results are up to God.’”