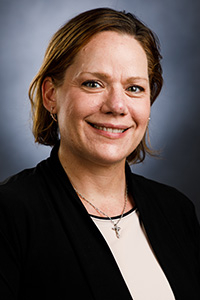 Dr. Rebecca Hagen Watson serves as the Chair of the Department of Music Education and Associate Professor of Music Education and Double Reeds at Liberty University in Lynchburg, VA, and holds the position of Second Bassoon of the National Philharmonic Orchestra in Washington, DC. She held the position of Bassoonist and Contrabassoonist with the Pfalztheater Kaiserslautern, Germany for 8 seasons. During her tenure as Bassoonist and Contrabassoonist with the Pfalztheater Kaiserslautern in Germany, she also had the opportunity to perform, broadcast, record, and tour with the Deutsche Kammerphilharmonie Bremen, the Suedwest Rundfunk Kaiserslautern, the Saarlaendische Rundfunk Orchester, the Mainzer Stadttheater, and others. Concurrently, she studied with Marc Engelhardt, Professor of Bassoon at the Musikhochschule Stuttgart.

Dr. Watson completed her Doctorate at the University of Arizona, studying bassoon with Dr. William Dietz. She concurrently studied oboe with Dr. Sara Fraker, Professor of Oboe at the University of Arizona, and oboist with the Tucson Symphony. Dr. Watson has studied oboe as a secondary instrument for over twenty years, working with Dr. Amy Burgus, Jennifer Bernard, and Dr. Rebecca Mindock, among other professional oboists.

Dr. Watson frequently performs recitals and master classes across the country and has been a featured soloist on live and recorded broadcasts of Arizona Public Radio.