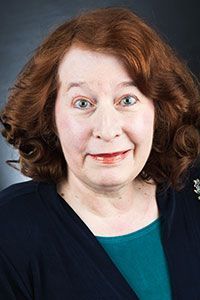 Linda Granger, mezzo-soprano and collaborative pianist, is an active performing artist and voice professor. She began her piano training at age 6, voice at age 10, and by age 14 was singing opera arias and playing piano concertos with the Kansas City Civic Symphony, the Topeka Symphony, and the Kansas City Philharmonic. She was invited to be the accompanist for the Nora Lamar Moss (retired Metropolitan Opera singer) voice studio at the age of 12 and continued in that position until leaving at age 17 to pursue a Bachelor’s degree in piano and voice at Northwestern University. She completed her undergraduate work at Hollins University with a double major in Piano Performance and Vocal Performance as well as minors in Theatre and History. Associate Professor Granger holds a Master of Music degree in Vocal Performance from James Madison University, where she had an Accompanying Assistantship, playing 33 vocal and instrumental recitals in a year and a half, as well as performing in choral concerts and operas.

As a singing actress, Professor Granger performed 25 major roles in opera and musical theatre, including La Cenerentola, Rigoletto, Martha, The Daughter of the Regiment, The Fantasticks, My Fair Lady, The Sound of Music, and The King and I. She has performed with Southwest Virginia Opera, Mill Mountain Theatre, and Showtimers Theatre in Virginia, as well as in Dinner Theatres in Kansas City, La Porte, Indiana, and the Cape Cod Playhouse in Dennis, MA. Professor Granger’s oratorio experience includes performances of the alto solos in Handel’s Messiah, Mozart’s Requiem, and Bach’s Magnificat and St. John Passion with the New River Valley Symphony, the Roanoke Symphony, and the Blacksburg Master Chorale. As a collaborative pianist, she has performed over 250 concerts to date, including professional and faculty concerts and 121 senior recitals.

Professor Granger has been listed in Outstanding Young Women of America, and Who’s Who Among America’s Teachers. A member of NATS (National Association of Teachers of Singing) since 1982, she has had 25 students win First Place, Second Place, and Honors at annual Student Competitions and has served on the Board of NATS. Her students have also received first and second place recognition at the Opera on the James Competition.

Professor Granger taught piano part-time at Hollins University and Roanoke College and was Adjunct Professor of voice and piano at Lynchburg College. As an Associate Professor of Voice in the School of Music at Liberty, she continues to teach voice and play for her students’ lessons and recitals.