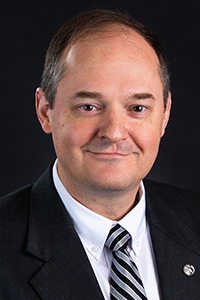 David “D.J.” Western serves as Associate Dean for Administration and Student Development. His career spans over 27 years as both an enlisted airman and a commissioned officer in the United States Air Force. During this time he has spent over three years in the deployed environment to include tours in Saudi Arabia, Qatar, Kyrgyzstan, and a forward deployment to Afghanistan.

In addition to a passion for law, Dean Western is also a linguist who speaks four languages fluently. While teaching at the United States Air Force Academy, Dean Western used this skill to teach an International Humanitarian Law course (in French) designed to better assist his students as they prepared for the Concours Jean-Pictet Competition. In 2013, Dean Western was the inaugural winner of an Air Force Level Award for Top Linguist of the Year. He earned this recognition for his French and Arabic translations at the Combined Air Operations Center (CAOC) in Al-Udeid while assisting gulf nations and the French Coalition as they supported OPERATION ENDURING FREEDOM and INHERENT RESOLVE.

While pursuing his LL.M. in International Law, Dean Western competed in the Space Law Moot Court Competition. His team did so well, they won both the US Championship and the World Championship competing in India against champions from Europe and Asia-Pacific. The contest was held in front of the International Court of Justice and his team was sponsored by NASA. As a recognized expert in Space Law, Dean Western leveraged this skill to build Australia’s space capability. While serving as an exchange officer, Dean Western led the Australian committee to write Australia’s Space ROE, and design its entire Space Law program. The Secretary of the Air Force International Affairs Office recognized his leadership with an international affairs team award in 2009.

More recently, Dean Western was sent to Cameroon to help resolve an international humanitarian law dispute involving the Cameroonian military and Boko Haram detainees. Amnesty International had recently released a report of widespread abuse and torture by members of the local military. Col. Western was asked to use his international law expertise and French fluency to convince senior Cameroonian leadership to incorporate legal advisors on the ground to avoid such travesties in the future. The Cameroonian leadership readily agreed and a comprehensive training program is now in place to correct such action in the future.

Whether around the globe or at home station, Dean Western is always seeking to make this world a better place.  He enjoys teaching the Bible at his local church, playing guitar for a praise team, and spending time with his wife and three children.