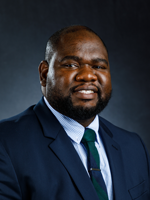 Roger Bryan joined to the Office of Institutional Effectiveness in June 2019 after working in Enrollment Management as an Academic Advisor from 2015 and as a Senior Academic Advisor from 2017. Roger is originally from Barbados, moving to the U.S. at the age of seven to College Park, Maryland when his mother came to pursue her Ph.D.  In 2015, he earned his B.S. in Psychology: Human Services. As a student athlete, Roger competed on Liberty’s football team under Head Coach Turner Gill. He is currently pursuing his M.Ed. in Higher Education: Instructional Design & Technology, and expects to graduate this Fall 2019.

Roger enjoys spending time with his wife and two sons. He also spends time volunteering in the community as a mentor for two adolescent boys.