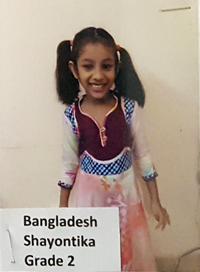 Timberlake Christian School is participating with “Allow the Children” and the second grade class is sponsoring a child from Bangladesh. Her name is Shayontika Das and she was born in 2011. Shayontika’s father is a pastor in the slums of Bangladesh. The church members are very poor and her parents do not make enough money to send her to school. Shayontika is very thin and her parents are having a hard time providing proper nourishment. The students are very passionate about Shayontika’s sponsorship. It would provide her with the nourishment and education she needs. A parent of one of Timberlake Christian School’s second graders works here in IE. When presented with the opportunity, IE was happy to participate in the sponsorship. 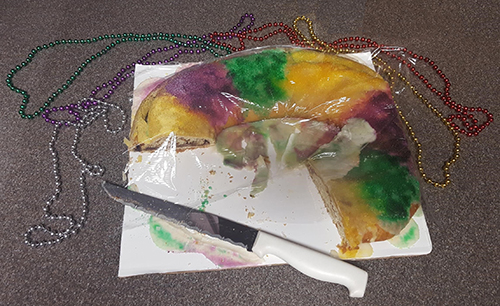 This Community Care Initiative started with the purchase of a New Orleans style King Cake. One of our Institutional Effectiveness (IE) team members bought a cake and shared it with the office. A family was having a bake sale to help raise funds for an adoption. An adoption of this sort costs around $35,000. The family has already signed with Christian Adoption Consultants and undergone the home study.  The father of this family is a Worship Pastor at their church. The family currently has two biological children.  The family looks at being able to participate in adoption as a mission opportunity. Once IE staff found out what the King Cake was for, we wanted to help too. IE collected additional funds and sent them to the family. As one of our team members stated, not only did we enjoy the cake, but we could “enjoy knowing you’re helping a loving Christian family adopt a precious child!” 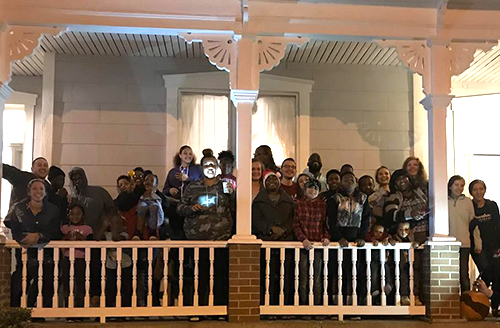 Through staff member Jonathan Susman , IE helped to sponsor a Christmas party for the Community Restoration Initiative’s (CRI) Family Night.  The CRI is a non-profit organization that hosts and maintains environments that cultivate healthy family support systems within Lynchburg neighborhoods that reflect the body of Christ.  Family Night is a weekly gathering of individuals and families from all ethnic and socioeconomic backgrounds who gather around food, games, and scripture discussion to build deep and lasting community.

IE’s contributions helped to provide food and drinks for the Christmas party, hosted at the house of one of the families.  Activities included Christmas caroling and the reading of a story about the writing of the well-known song, “I Heard the Bells on Christmas Day.” 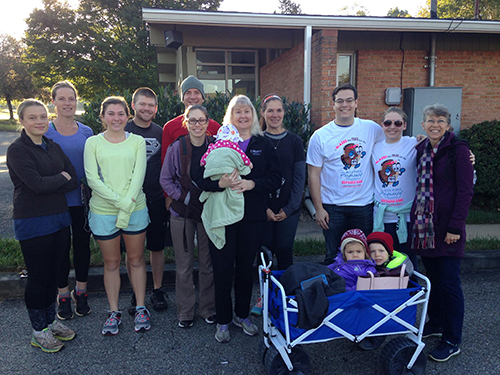 This week the staff of the Office of Institutional Effectiveness joined in a breakfast fundraiser to support Cherie Ely as she prepares to participate in a 5K walk on Saturday, October 21st, to benefit the Blue Ridge Pregnancy Center a non-profit organization that exists to save lives and comfort those involved with unplanned pregnancies.  Cherie has been in training for some time in anticipation of this event and the office is proud to support her efforts in raising awareness for this worthy cause.

This year we adopted a Christmas project to bless and support the family of one of our IE staff.  Eleven years ago, this staff member’s daughter received a diagnosis of non-Hodgkin’s lymphoma.  Since that time, she has undergone several surgeries to remove or reduce the size of the tumors that have spread throughout her body.  She is now in a clinical trial to help shrink the tumors that continue to grow. The IE family reached out in a very generous show of support to help with the medical costs of cancer treatment.

The IE Office collected items for the Blue Ridge Area Food Bank as part of a campus-wide initiative this year. Our office collected three boxes of nonperishable food items. Sodexo has pledged to match Liberty’s donations pound for pound, so all donations are doubled!

Sharing the Joy of Christmas

As soon as the fall initiative was completed, we set our sights on helping someone for Christmas. Partnering with a local ministry that mentors and supports single mothers in the area, we were privileged to meet a young single mother and her two children. We enjoyed being able to brighten their holiday by sharing some wrapped gifts and supplies for Christmas dinner. Our contact described our new friend as a “very, very sweet teenage mother (who) is just beyond blessed by even the thought” (of strangers wanting to share in their Christmas).

Our purpose is to glorify God by sharing His blessings with those around us and to perhaps motivate others to consider ways to reach out to others in the community as well. 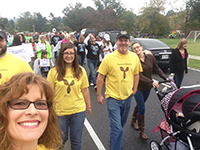 One of the Community Care Initiatives the Office of Institutional Effectiveness (IE) chose to support this fall was the annual fight against Amyotrophic Lateral Sclerosis (ALS) or Lou Gehrig’s disease, as it is commonly known. ALS is a progressive debilitating disease that claims a victim every ninety minutes. We raised funds during September and October to sponsor a team at the Roanoke Walk held at Hollins University in October.

The Roanoke Walk is sponsored annually by the local ALS Association Chapter for DC/MD/VA.

The Lynchburg Humane Society identified a problem. The current shelter is unsafe, uninviting, and unhealthy. It is an embarrassment. It lacks the space, the sanitation and the safety required of an animal shelter.  Because of this unwelcoming environment, it is difficult for people to visit and adopt animals. The Board of the Lynchburg Humane Society committed to the development of a new humane care and education center.

This center will happen for Lynchburg with the community’s support.  When completed the Lynchburg Humane Education and Adoption Center will be an integral part of the fabric of our community. IE employees supported the Humane Society’s “humane Campaign.”  Once a week, two people in our office would prepare breakfast for everyone. Anyone who wished would then purchase breakfast by making a donation to be sent to the Lynchburg Humane Society.  We did this for a total of eight weeks. We welcome the opportunity to be a part of the plan.

One of the Community Care Initiatives the Office of Institutional Effectiveness (IE) chose to support this year was the annual fight against Amyotrophic lateral sclerosis (ALS) or Lou Gehrig’s Disease, as it is commonly known.

A dear friend and co-worker, appropriately named Hope, greatly impacted our department when she brought her community interests to us.   Many of us joined her in activities to fight ALS. This “fatal disease leads to an inability of individuals to speak, move, and eventually breathe on their own. It kills someone every 90 minutes.” This definition is from the promotional materials provided by The Roanoke Walk to Defeat ALS®.

Their vision is to “Create a world without ALS.” Their mission is “Leading the fight to treat and cure ALS through global research and nationwide advocacy while also empowering people with Lou Gehrig’s disease and their families to live fuller lives by providing them with compassionate care and support.”  Hope’s “Pops” has suffered from ALS for eight years, five more than the six months to three years he was given to believe was even possible. IE is very proud to be associated with this wonderful, caring, community support group along with Hope and her extended family.

There were two ways IE personnel were involved in this community effort:

Please consider finding a way to help fight this cruel disease in your area. Every 90 minutes this disease steels one more loved one away from those who care.