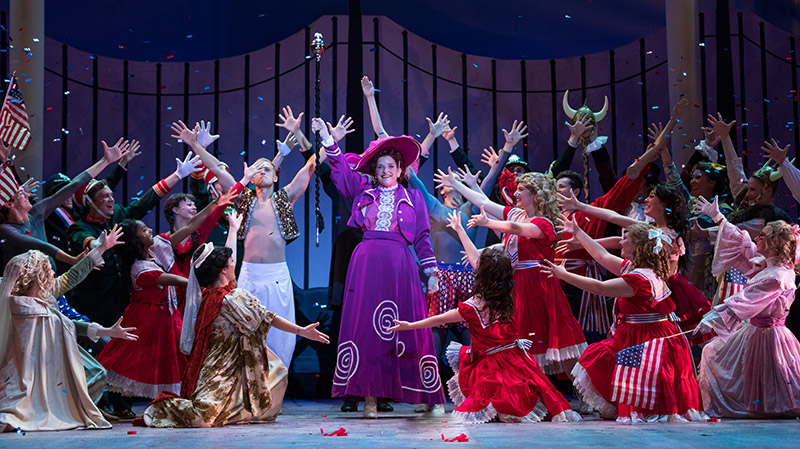 From starry-eyed youngsters burning with passion to older folks weathered by heartbreak and loss, “Hello, Dolly!” — the latest musical production from Alluvion Stage Company to hit Liberty University’s Tower Theater stage — connects the timeless pursuit of love across generations. Audiences of all ages will be able to relate to the uplifting story, opening tonight and running through Sept. 30 with 12 performances.

Filled with memorable songs ranging from high-energy, big-brass showtunes to tender ballads, “Hello, Dolly!” is a classic, having been revived time and time again since it debuted on Broadway to critical acclaim in 1964.

The Tower Theater is the first regional theater in the nation to present “Hello, Dolly!” since it closed on Broadway in August.

Alluvion Artistic Director Linda Nell Cooper said that “Hello, Dolly!” will transport audiences “to a simpler time when love was not so complicated.”

Set in both small-town New York and the Big Apple in the late 1800s, the story follows matchmaker Dolly Levi as she sets out to find a companion for Horace Vandergelder, a prominent, small-town businessman.

From period-inspired rolling sets and colorful costumes to its largest live orchestra to date, Alluvion has invested greatly in setting the mood just right for the show.

“There is a feeling of stepping back in time,” Cooper said. “It’s a reminder of a time when people believed in and committed to love. It’s about finding love unexpectedly, and it covers an emotional spectrum.”

In today's world, decorum in relationships seems to have fallen by the wayside.

“I think it will open up conversations about courting and dating and knowing when you have found the right one,” Cooper said. “It’s a fun way to talk about it.”

The story is filled with humor, including those awkward moments of managing societal expectations while pursuing a romantic crush. 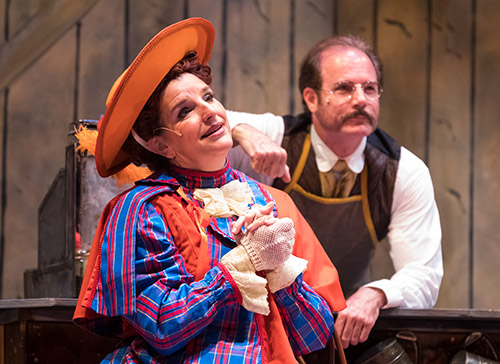 The cast of 31 is led by two seasoned talents. Perry Payne Millner, who plays Dolly, is a longtime New York City singer, actress, and writer who recently served as executive director of the Virginia Theatre Association. Millner is a native of Lynchburg (read more about her in The News & Advance). Mark Inbody, who plays Horace, is a professional stage actor whose career has included work for Walt Disney World, Sight & Sound Theaters, and Dollywood Entertainment.

Alluvion provides Department of Theatre Arts students with opportunities to earn a professional stage credit while working alongside Actors Equity Association pros and crewmembers who have extensive experience in shows from Broadway to regional theaters.

“The opportunity to work with and interact with such experienced talent like Perry and Mark has been so worthwhile,” said senior Hannah Mehl, who portrays Minnie, a fast-talking young assistant. “I’ve learned so much by just watching them in the rehearsal process; they both commit to their characters and make choices right off the bat, making them both so much fun to work with.”

“It’s truly an inspiration seeing these two (Millner and Inbody) not only enjoying what they’re doing every day, but seeing that they have had such successful careers throughout their lives,” added senior Brandon Alexander. 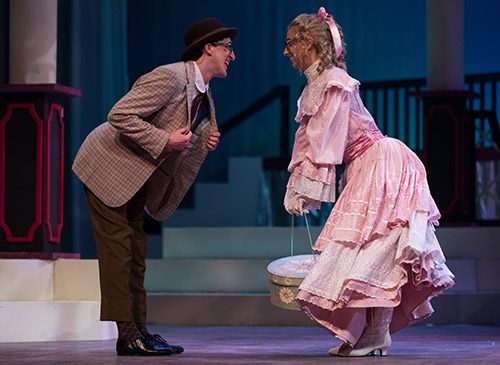 Alexander plays Barnaby Tucker, a naïve 17-year-old who must break out of his shell as he falls in love.

“Barnaby and I are very similar because we’re both high-energy, slightly nerdy,” he said.

Even though the production is written as “an over-the-top musical comedy,” Alexander said he also tries to make Barnaby relatable.

“I hope that the show in general leaves the audience with a sense of hope," he said. "A hope that comes from seeing even the most unlikely people finding love, hope, redemption, and freedom.”

According to Cooper, the 2018-19 mainstage season at Liberty is filled with sentimentality and history — from the epic drama, “Bloodroot: The Ballad of Clinch Mountain” (opening Nov. 2 in the Box Theater and inspired by the mountain women of Virginia), to “Annie Get Your Gun,” a Wild West comedy musical romp.

“‘Hello, Dolly!’ is sure to put a lift in your step, a tune on your lips, and a smile in your heart as we head into our new season,” Cooper said.