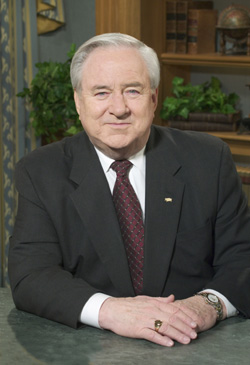 In June of 1956, at the age of 22, Jerry Falwell started Thomas Road Baptist Church in his hometown of Lynchburg, Va., with 35 members. Also in 1956, Falwell began the “Old Time Gospel Hour,” a nationally syndicated radio and television ministry that has led millions to Christ.

Today his vision has been fulfilled, with more than 15,000 students attending classes on campus in Lynchburg, Va., and more than 94,000 students from all 50 states and 85 countries taking courses through Liberty University Online.

Falwell may be best known outside Lynchburg for his political activism. In June 1979, he organized the Moral Majority, a conservative political lobbying group that was pro-life, pro-family, pro-Israel and favored a strong national defense. The group chose California Governor Ronald Reagan as "their candidate" for the 1980 presidential election, registered millions of new voters and mobilized a sleeping giant — 80 million Americans committed to faith, family and Judeo-Christian values.

Although he became a national figure, his passion was being a pastor and a Christian educator. He often stated that his heartbeat was to “train young Champions for Christ” in every walk of life.

Falwell passed away on the morning of May 15, 2007, at the age of 73. He was married for 49 years to Macel Pate Falwell, who died in 2015 at the age of 82. Their three children are Jerry Jr., former president of Liberty University; Jonathan, senior pastor of Thomas Road Baptist Church; and Jeannie, a surgeon; and eight grandchildren.