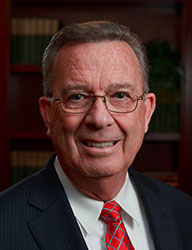 Liberty University has announced that Chairman Jerry Prevo has accepted the appointment by the Executive Committee of the Board to serve as the Acting President of the University. This follows the announcement on August 7 that the Board of Trustees and President Jerry Falwell, Jr. agreed to an indefinite leave of absence. All members of the Board of Trustees expressed their support for the Executive Committee’s appointment of Dr. Prevo in a meeting today.

This latest announcement comes two weeks before the start of the 2020-21 academic year.

Dr. Prevo has served on the Liberty University Board of Trustees since 1996 and has been the Board Chairman since 2003. He recently retired as the Senior Pastor of Anchorage Baptist Temple in Anchorage, Alaska, after serving that community for 47 years. During his stewardship of Anchorage Baptist Temple, it became one of the largest churches in Alaska and had the largest school in Alaska, as well. Additionally, Prevo is the CEO and chairman of Christian Broadcasting Inc., which he started and now has three stations and two broadcasting towers in Anchorage, Alaska.

“I want to thank my fellow board members for having confidence that I could be entrusted with the responsibility of serving as the Acting President during this time of Jerry Falwell, Jr.’s indefinite leave of absence,” said Dr. Prevo. “We have a world-class leadership team at Liberty University who will support me in running our operations on a day-to-day basis and fulfilling our spiritual mission unabated: Training Champions for Christ. Please pray for us as well as the Falwell family as we embark on our academic year and so we may continue to be united in our common purpose and our faith in Christ,” he concluded.

Dr. Prevo will begin work as Acting President immediately and expects to work from the Lynchburg campus starting on Monday, August 17. He has also stepped aside from his role as Chairman of the Liberty University Board of Trustees for the duration of his service as Acting President of the University.