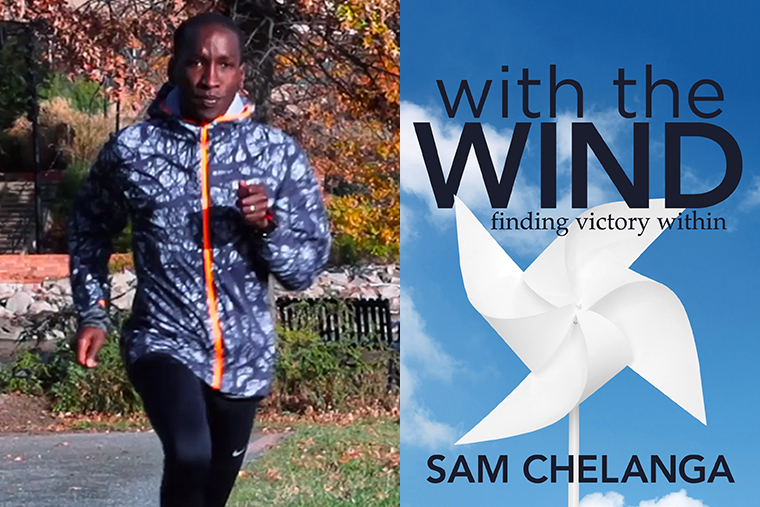 For those seeking direction and purpose in their lives, Liberty University alumnus Sam Chelanga (’11) has written a testimonial book, “With the Wind: Finding Victory Within,” released last week.

A native of Kenya who became a four-time NCAA champion in cross country and track and field for the Flames, Chelanga uses running as a metaphor and his life experiences off the track to illustrate God’s grace and inspire others to walk by faith. 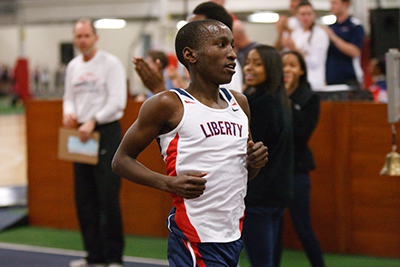 “I didn’t want to isolate the book to be about religion or about running. When I say ‘With the Wind,’ there is someone else that is authoring your story. Ultimately, it’s God. He’s there, and He will lead you to where you want to go.”

Growing up in Nairobi, Chelanga was the 10th of 11 children whose mother, Ann, died before he turned 10. He dreamed of becoming a lawyer to help provide for his family, but nearly abandoned plans to pursue a degree when visa issues delayed his travels to the United States. Resolving to a life of subsistence farming on his family’s 1-acre homestead to support their ailing father, Chelanga was inspired by his sister, Winnie, to fulfill his God-given potential.

“It’s not just about you, Sam,” she said, as Chelanga recalled at the end of the book’s first chapter. “If you don’t go and dare to dream, who else will? We need someone in our family to make a difference. We need you. You are our hope.”

Paul Tergat, a two-time Olympic medalist for Kenya who was instrumental in bringing Chelanga to the United States in 2006, wrote a forward for the book, which was proofread by his wife, Marybeth. 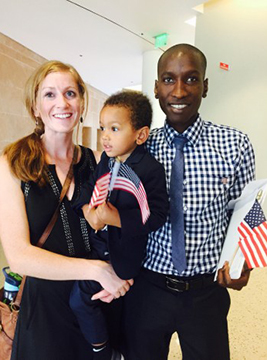 Two weeks ago, Sam and Marybeth and their three sons, Micah, 7, Joseph, 3, and Jeremiah, 1, moved from Fort Jackson, S.C., where Sam completed basic training in 2018, to Destin, Fla., where he is a platoon leader stationed at Eglin Air Force Base providing sustainment for the 7th Special Forces Group.

“We love it here,” said Chelanga, who completed officer’s candidate school at Fort Benning, Ga., and leadership school in Fort Lee, Va., in 2019. “Without a doubt, every day I go to work, it’s a very tough job, but it is definitely worth it. I went into the U.S. Army to serve my country, but it has taught me so much. I feel like I have matured. Now I know what it is like to be a leader, to put someone before yourself, whether in my military career or any job I end up doing.”

Chelanga said he is thankful for his government degree at Liberty, where he solidified his foundation of faith and kept his focus on Christ, paving his way for future adventures.

“I randomly text (President) Jerry (Falwell) all the time and tell him Liberty has made a huge impact on my life,” Chelanga said. “God guided me to Liberty and I know I needed it. Everything I know I learned at Liberty. Coming out of Liberty, you are different because it sets you apart and you can meet different challenges. I never dreamed that one day I would be in the U.S. Army. My Christian faith is what is giving me a level head during these tough times.”

He said life without Christ is like chasing after the wind. 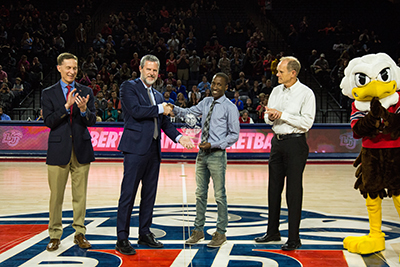 “Everybody is chasing something, trying to be successful, to provide for your family,” Chelanga said. “We’re really consumed in that endeavor. I want to tell people, ‘Don’t worry about it. Just like the birds of the air, He will provide for you. The wind will come and bring what you need.’”

Though he retired from running professionally, Chelanga hasn’t completely abandoned his Olympic dreams. He placed 21st out of 175 men’s marathon runners at the 2020 U.S. Olympic Trials on Feb. 29 in Atlanta with a time of 2:15:04 in the 26.2-mile run. He talked with his former coach at Liberty, Brant Tolsma, about training for Tokyo, site of the Summer Games postponed by COVID-19 to 2021.

“He said, ‘You’ve got to get back on the track,’” Chelanga said. “I’m training just to stay healthy and fit with COVID-19, but when things settle down, with the Olympics moving to 2021, I might take another crack at it. It would be really fun to see what I could do.”