Since the COVID-19 crisis began to affect Virginia, the executive leadership of Liberty University has worked closely with President Jerry Falwell and the Council of Independent Colleges in Virginia (CICV) to comply with all state restrictions while providing safe and reliable accommodations for students choosing to return to campus and for all students to continue their residential studies in an online format.

“I was on a conference call with other college presidents and representatives from private colleges, and we listened to what other schools were doing. Many were throwing their hands up and saying they would just close and others were going to extend their breaks. At that time, we were on Spring Break, so we had time to work on it,” Falwell said.

He explained that the decision came down to whether to extend the break and risk students having a longer time to become exposed to the virus and bring it back to Lynchburg, or to put everything in place in time for their return.

“Our thinking was, ‘Let's get them back as soon as we can — the ones who want to come back.”

Falwell said that when Virginia Gov. Ralph Northam imposed the 100-person gathering limit, the university, through the CICV, let the Virginia Secretary of Education’s Office know that the school had decided to move all instruction online, except for some particular programs and labs, effective on the next day of classes, today, Monday, March 23.

“The communication lines were open (with the state office) the whole time,” he said. “They sent a message back that they were very grateful to us for letting them know what we had decided.”

Falwell said Lynchburg’s mayor and city manager also contacted him to ask about the university’s pending decision, and he again received a favorable reaction.

“They thanked us for making that decision,” Falwell said.

During Spring Break, Falwell and his executive leadership team began meeting every afternoon to determine the measures that needed to be taken for all programs to go online and for students to be able to return to their dorms and use the campus dining services that they paid for.

“We were able to make huge changes in a short amount of time,” Falwell said. “It's an incredibly fluid situation because every day there was another piece of news or another governor's order, which would cause us to adapt and rethink our processes. It’s been on-the-fly teamwork from the whole group.”

That included the university’s IT department rolling out a new digital platform for video classrooms.

“The professors had to learn a new system. They had to go in and do some announcements and let students know how they were going to do their classes — and that was expected of them on Spring Break. It was a lot to ask, but they came through, in true Liberty fashion, and we thank them.”

He said operations on Monday have been seamless. He walked through campus and met with many of the students who had returned.

“They were talking about being glad to be back. I was joking about how they pretty much had the whole place to themselves, and told all of them to enjoy it.”

Falwell described the campus environment as “sort of a housing complex, with restaurants doing takeout.”

“So we're really not operating as a university, except online,” he said. “I’m just thankful we have the resources and cooperation of our staff so we are well equipped to do this.”

He said that by keeping the residence halls open, the university is able to accommodate all the international students unable to return home, as well. And the campus is a welcoming place for the commuter students, he added, who could not break their leases and who remain an important part of the Lynchburg community and the local economy.

Sodexo, the university’s dining services provider, has been adhering to the 10-patron limit, making sure that students can continue to use their meals plans. Tents have been set up for students to retrieve their meals, and LUPD is posted at the dining locations to ensure the rule is observed.

Falwell said the Virginia Department of Health sent an inspector from Richmond to campus the morning after the Governor published a new order establishing a 10-patron limit in restaurants — for a surprise inspection; Liberty was found to be in compliance of all state restrictions related to COVID-19.

The university has been keeping the Liberty community regularly updated though a COVID-19 website.

Falwell said the university has been consulting with medical professionals daily, including a physician from New York’s largest healthcare provider, and a local physician. The university has also sought advice from faculty within its Master of Public Health program and is working closely with the healthcare professionals on campus through Keith Anderson, executive director of Student Health Center and Wellness Initiatives.

The campus is currently closed to visitors, and “No Trespassing” signs have been posted at the entrances to help ensure that only students, employees, prospective students and their famlilies, as well as those doing business with the university are allowed.

On campus, in addition to dining services accommodations, Falwell said the cleaning crews have been ramping up their work, cleaning oft-touched surfaces every hour. Annex I, a former hotel property owned by the university, has been set up to quarantine anyone who has symptoms before they can get medical attention. In the academic buildings, computer labs, and throughout the social gathering areas on campus, signs have been posted to take certain seating out of service so students follow social distancing guidelines. Members of Liberty’s student leadership team are also helping to enforce the new rules along with faculty and staff.

Students have been also able to use campus fitness centers, but also are restricted to the 10-person rule. Outdoor recreation activities are still available, including the mountain trails.

All campus events have been canceled on a two-week basis (reevaluated every two weeks). The university’s intensives (on-campus courses for students in the online program) that would normally bring students in from all across the country have also been moved to a video streaming format.

Falwell said the university has been working with employees and their concerns. There have been no layoffs thus far, and personnel are still involved in the daily functions of the university. 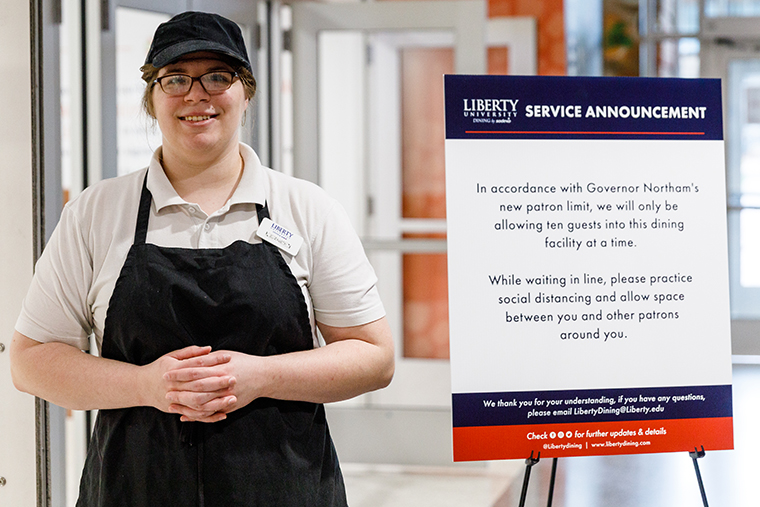 “Actually, our costs are more to operate with a lower number of students on campus because we had to create this special hybrid online educational platform and we have to clean a lot more often,” he said. “So far, it doesn't really matter whether it’s 1,500 students on campus or 7,000, it's still about the same amount of expense.”

Liberty’s Human Resources department has been processing requests from employees who are dealing with health and medical problems that put them at a higher risk for contracting COVID-19 and making accommodations as appropriate.

“Unfortunately some faculty went directly to the media instead of to HR,” Falwell said. “If they had, they would've learned that accommodations were available to allow those with medical conditions to be separate from others.”

Falwell said he has been extremely impressed with the amount of work, care, and compassion that Liberty’s leadership and faculty and staff have shown.

“While some colleges basically threw their hands up and just shut down and left the problem for somebody else to deal with, Liberty's executive staff rolled their sleeves up,” he said. “I've been so impressed meeting with them every day; they have stepped up to the plate and made necessary changes to help the students. If there was a medal of honor for their type of service, I'd give every one of them one for their incredible work and how creative they are. I don't think there's another university in the country that has a staff as good as ours.”

Falwell said he conducted an interview with The News & Advance to inform the Lynchburg community of all the precautions Liberty has taken, but he was disappointed that an article still had not been published at least 24 hours after the interview.

“We have a great story to tell,” Falwell said. “We think Liberty’s practices will become the model for all colleges to follow in the fall, if Coronavirus is still an issue."