There is evidence that a Revolutionary War arsenal once stood on the former Bedford Alum Springs Hotel property, a nearby estate purchased by Liberty University in May 2018. The grounds conceal layers of rich history, and students from Liberty’s history department are helping to unravel those mysteries.

Earlier this month, students in Liberty’s first archaeology course, Archaeology and Public History, excavated alongside professional archaeologists to extract secrets beneath the surface.

“This is a wonderful opportunity for students to receive hands-on research archaeology exposure,” said Professor Donna Donald. “The fact that Liberty had the foresight to purchase this property with students in mind is great. It’s pretty unusual for students to obtain this kind of hands-on, year-round exposure working with professionals in the field.”

The students pulled artifacts from the ground, processed them through lab stations with professionals, and performed research and interpretation on their findings.

For online student Kaelyn McCormick, who traveled from Texas for the weeklong intensive, this public history course was the perfect opportunity to acquire firsthand experience.

“I was extremely excited,” she said. “A professor I had last semester told me about this intensive the history department was doing, and history has always been something I’ve been into since a little kid. … I like working with my hands a lot, so doing this hands-on work is a lot of fun.”

The history department partnered with archaeologists from Hurt & Proffitt (H&P), an engineering and survey company, to help students organize and archive their artifacts.

“Usually we have the students come out and volunteer with us in small groups,” said Randy Lichtenberger, H&P’s director of cultural resources. “But this is the first time we’ve organized it into a formal class, which is great because they get the lab experience and some classroom lecture, but they also get to come out here and dig.” 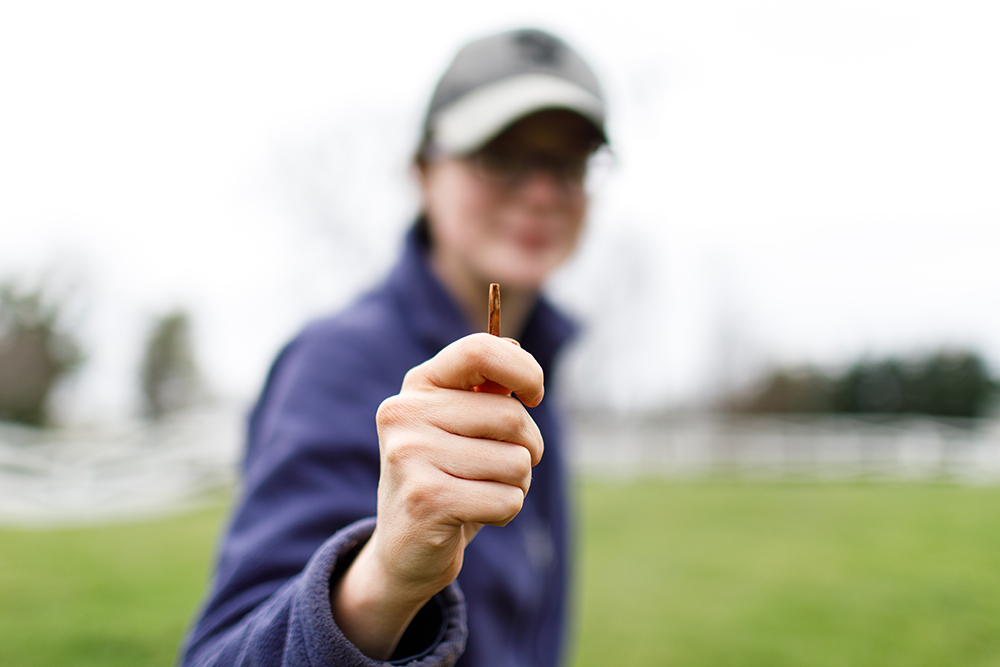 Five years ago, Liberty purchased its first property in the former colonial town of New London — Mead’s Tavern, located about 100 yards from the hotel property. The tavern is the oldest standing structure in Central Virginia. Students have been involved in the process of investigation and restoration with H&P there as well, already recovering a large assemblage of 18th- and 19th-century artifacts, including coins from the 1790s, a uniform button from Wayne’s Legion, the first United States army organized by George Washington, and various items such as homemade gaming pieces fashioned from broken ceramic plates, smoking pipes, and decorated stemware.

The historic properties are beloved relics to the New London community, and Donald said this excavation is a positive way to give back to the community. Each shard of ceramic, nail, and bits of brick and mortar, Donald said, helps unravel New London’s detailed, rich narrative.

New London predates the American Revolution and was originally established as the western-most center on a major trade route. Located at the intersection of two main wagon roads, the town served as the last stop for settlers headed west to the Frontier. With beautiful mountain views but relatively flat land, it became a prosperous town when the only mode of transporting goods was by stagecoach. It was officially chartered in 1754 and served as the county seat for Bedford County.

The town is said to have attracted some well-known historical figures, including Thomas Jefferson, Patrick Henry, and others.

The current excavation will help students determine locations of buildings on the 6.4-acre property and provide a clearer picture of the culture of the village and its significance in American history.

“If we can find archaeological evidence to go along with all the documentation we have, it will dramatically expand what we know about backcountry Virginia and the revolutionary era,” Donald said.