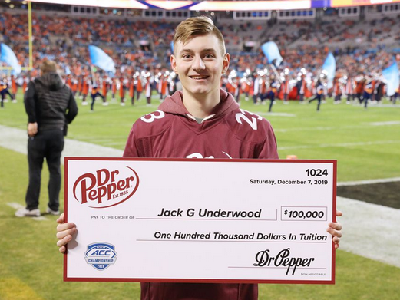 Jack Underwood, a Liberty University student in the Bachelor of Music in Worship Leadership program, won $100,000 on Saturday during Dr Pepper's Tuition Giveaway halftime promotion at the ACC Championship football game with Virginia and Clemson in Charlotte, N.C. He tossed footballs into a goal within 30 seconds from the 5-yard line.

Underwood, from Anchorage, Alaska, submitted a video in October to enter the contest. In his video, he said he was working a full-time job in Liberty's facilities department and was having trouble balancing work and school, considering forgoing college due to financial hardship.

On the "Meet the Finalists" section of Dr Pepper's Tuition Giveaway website, Underwood's profile reads: "to use music to touch people around the world."

"Music is my passion. I love to write music and spend so much of my free time learning new instruments or writing songs," Underwood's quote reads. "I want to be able to share my songs with the world, but with the job I currently have, I’ve lost the free time to write music. I’ve worked so hard to be here and with this scholarship I’m able to continue pursuing what I love."

Before the contest, Underwood continued his schooling during the day while working an evening shift. He eventually had to drop several courses due to a rigorous workload. In the video, he maintained his desire to be a worship minister, wishing to change the world for Christ.

When he won the contest, Underwood, one of nine children, called home to share the news with his mother. "My mom was sobbing and couldn’t speak,” he told news outlets. Both were completely amazed at "what God provided.”

Underwood said the win was a “miracle of God" and was due to the "generosity of the Dr Pepper Company and a guitar professor's definite encouragement.”

Underwood, 19, was one of 20 college students who were finalists in the video contest, earning them a chance at the football throw. Two competed at each of five different conference championship games around the country. Dr Pepper presented five $100,000 tuition grand prizes, five $25,000 runner-up prizes, and 10 $2,500 consolation prizes.