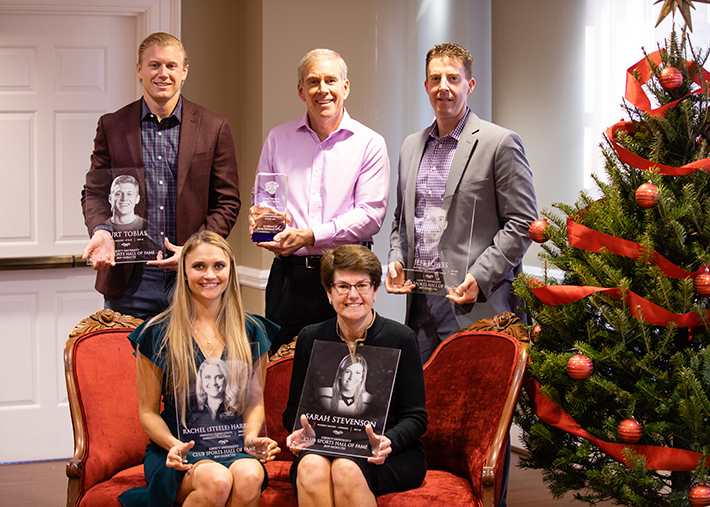 Tobias, the Flames’ men’s lacrosse team’s second-leading all-time scorer with 166 goals and 73 assists, helped the team transition from MCLA Division II to I in 2014. He was selected to the first-team All-SELC Division II in 2012, second-team SELC Division I in 2014, and third-team All-America Attack in 2013, when he helped lead Liberty to the MCLA Division II National Championship semifinals.

Lowes ranks among the leading scorers in Liberty’s Division II men’s hockey history and was named Atlantic Coast Conference Hockey League (ACCHL) Forward of the Year twice during his career from 1997-2001. He was inducted into the ACCHL Hall of Fame earlier this year, joining former teammate and current DI men’s hockey Head Coach Kirk Handy. Lowes, who served as an assistant coach to Handy from 2005-12, now works as an associate professor in Liberty’s exercise science department and as a chiropractor for the Flames Athletics’ Sports Medicine team while running his own practice, Virginia Sport & Spine Institute, in Lynchburg.

Harrison helped found Liberty’s gymnastics program after asking permission from Liberty President Jerry Falwell Jr., who would become a member of the Club Sports Hall of Fame’s inaugural class in 2014.

“The Lord plants dreams in our hearts for a reason and when we lean in and trust in His goodness, instead of trying to navigate the way on our own, He provides an answer that is far beyond what we can imagine,” Harrison said.

The most tearful presentation was saved for last in memory of Stevenson, represented by her parents, Ian and Janet. The traveled from Ontario for the ceremony after dozens of her teammates, coaches, and friends at Liberty journeyed north of the border for her memorial service after her untimely death from a sudden illness on Oct. 31, 2017.

“Her talents and passion ignited the flame for our team and year after year, she just increased the heat,” she said. “The camaraderie and sisterhood ran as deep as the fire in our hearts and the ice in our veins. With her help, our team continued to become more successful every year.” 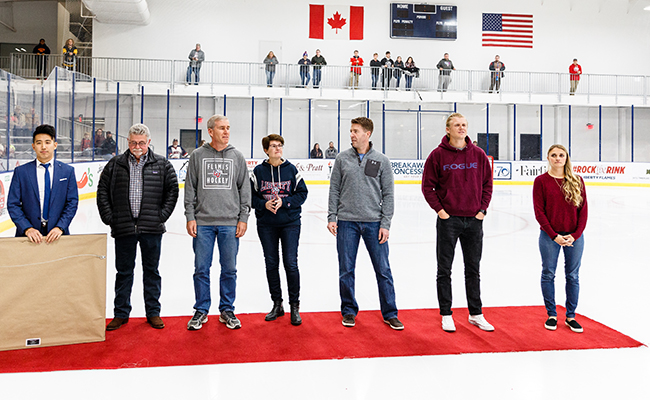 In her senior season, when she helped lead Liberty to its first national championship, Stevenson earned All-America honors and was selected as Liberty’s Forward of the Year, an award that has since been named in her memory. But her legacy as a Champion For Christ is far more significant.

“Our great, big God had plans for our Sarah,” Pinel said. “He knew that her heart would be changed here, that she would come to know Him and accept Him as her Savior and continue to shine brighter. We all knew, and it’s fair to say, Sarah was way too good to play for us, but I am so thankful for our God and that Sarah’s path led her to Liberty, led her to us, and ultimately led her to Christ.”

She became the first ACHA women’s hockey player to be drafted to play professionally, signing with the Toronto Furies for the 2015-16 season. She never forgot her Lady Flames teammates, who became like an extended family for the four years she spent at Liberty.

“Sarah was blessed with being a great skater, but more so being a team player,” Ian Stevenson said. “She always put the team ahead of herself. Sarah would be very happy to know that she is going into the Club Sports Hall of Fame with her teammate Stacey (McCombe, who was inducted last December.) They were the perfect pair. Stacey was a goal-scorer and Sarah liked to assist.”

Stevenson is still Liberty’s third-leading all-time scorer with 55 goals and a program-record 109 assists.