Liberty University students recently had the unique opportunity to visit the Library of Congress for the exchanging of ideas with some of the nation’s leading public servants and media professionals during the Helms School of Government’s Washington Symposium.

About 150 students from the School of Government and the Washington Fellowship (a semester-long internship program hosted by Liberty), joined students from Hampton University’s William R. Harvey Leadership Institute to hear from Sen. James Lankford (R-OK), Fox News host and Liberty alumna Shannon Bream, Brian Colas, deputy chief of staff for Sen. Tom Cotton (R-AR) and a Liberty alumnus; and Rep. Elaine Luria (D- VA). The discussion ranged from career paths and the media to the unique structure of American government and bipartisan engagement as the speakers offered a glimpse into their professional and personal journeys as both citizens and public servants. 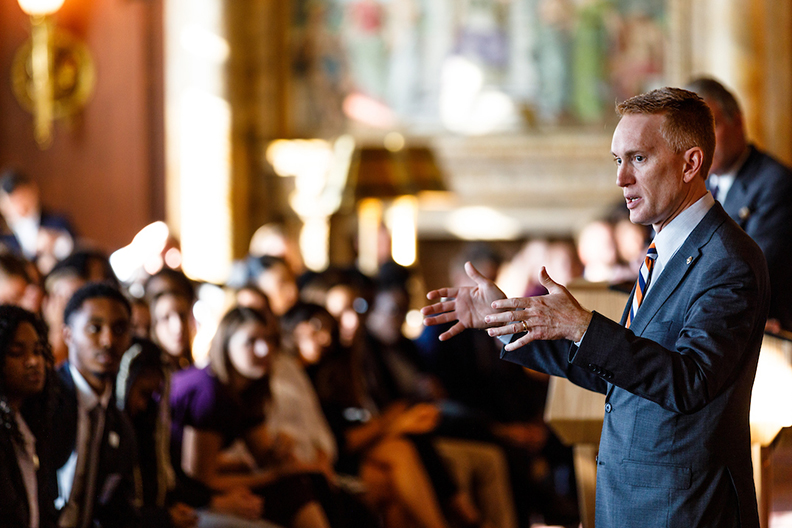 Sen. Lankford emphasized the importance of following God’s path, wherever it may lead. Lankford began his career in youth and camp ministry but heard God’s undeniable call on his life to run for elected office, and he surrendered to this call in March 2009.

“We’re not called to an occupation; we’re called to a person …,” Lankford said. “He assigns tasks along the way, but the calling remains the same — following him.”

Even though Lankford no longer serves as a pastor, he said he is still doing the same thing he did in youth ministry years ago: getting up every morning trying to follow Christ. 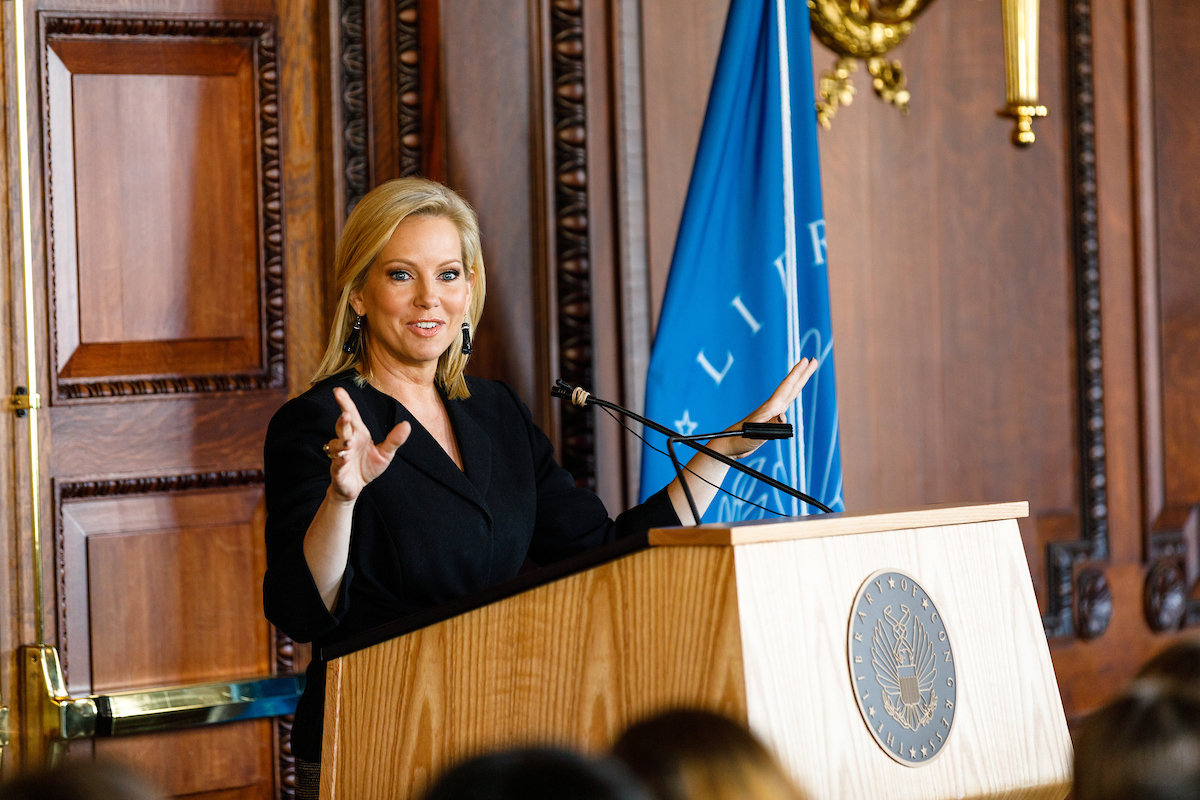 Lankford encouraged students to “know (Christ’s) voice” so they will be able to understand how to follow God with their lives and know when He is calling them to take a leap of faith.

Bream (’93) shared her unique and unforeseen path into journalism. A career change from law in her late 20s brought her to the media profession where she was told that she would never make it as a television reporter. Bream went on to hold the coveted position of host of Fox News @ Night and is a chief legal correspondent for Fox News. 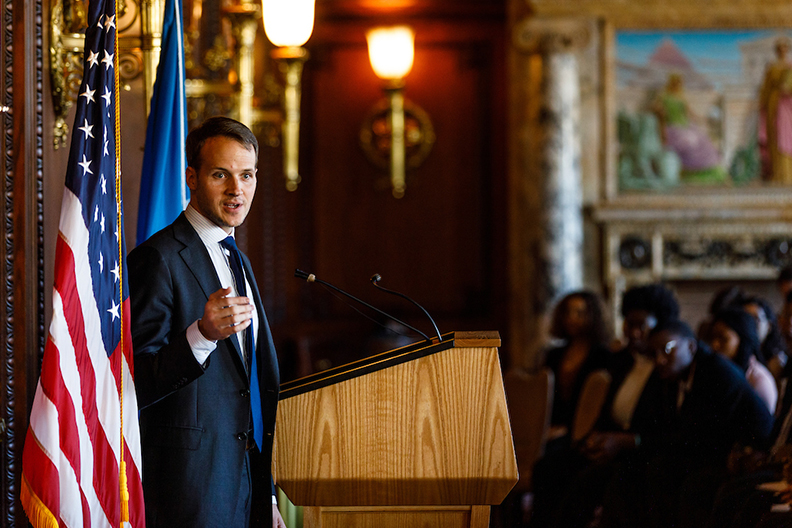 Colas (’07) also went to law school and said he assumed that he would spend his career as an attorney. Instead, he is serving on Capitol Hill. This worked out, he said, because he was flexible and kept an open mind about his career.

Rep. Elaine Luria began her career in the U.S. Navy, where she served for two decades and retired as a commander. Luria mentioned the importance of bipartisan engagement and shared that Virginia is one of the only states on Capitol Hill that holds a meeting each month with all members of the delegation. 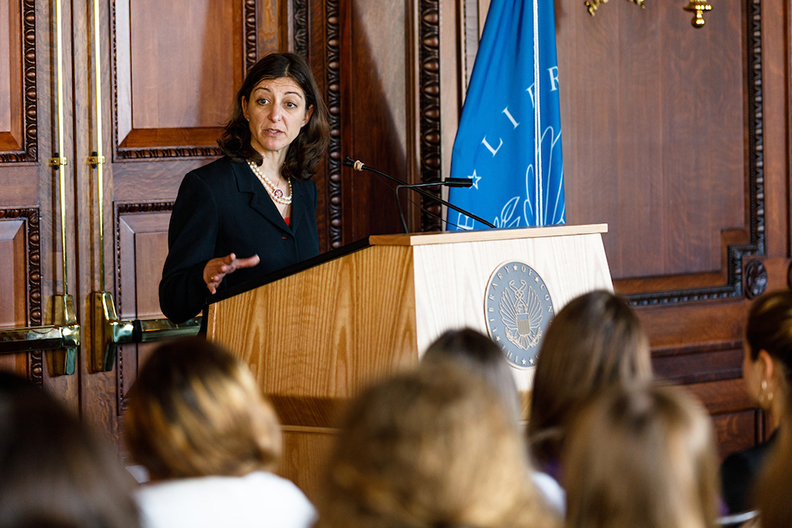 Each symposium speaker engaged with the students in a question-and-answer session, opening the floor to a variety of topics.

“When you listen to other people, you’re always going to be sharpening yourself …,” said Robert Hurt, dean of the Helms School of Government and a former U.S. Congressman. “The college experience is all about discovering yourself, testing your own philosophies and ideas against the different perspectives and ideas that you are offered.”

A topic that dominated the conversation was choosing a career path, as the speakers shared their unique career journeys that led them to where they are now.  Hurt shared his own story about his path to public service, which he said began around the dinner table from a family who taught him love and appreciation for history and his country. Hurt also served at both the state and local levels of government. He said he never had the desire to serve in Washington, but he felt that it was his responsibility to do so and could not say no to the calling on his life. He advised students to keep a broad horizon, always prepare for the next step, and listen to God’s calling, which is not always easy to do. 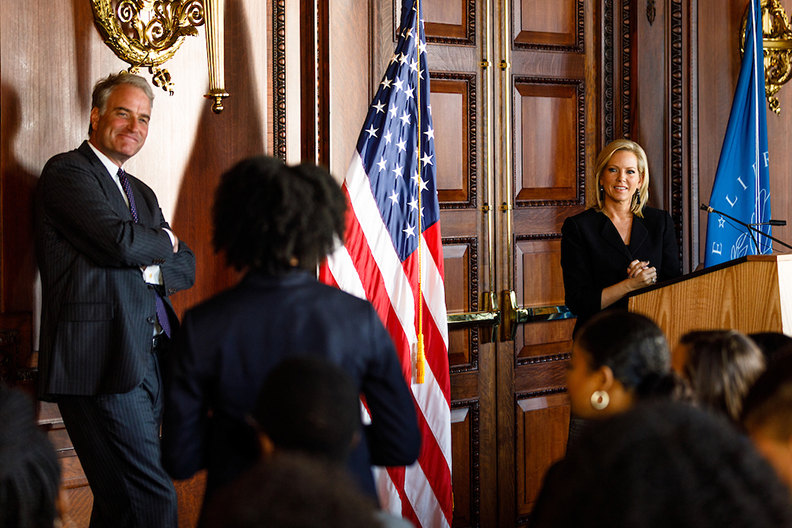 Dr. Jarris Taylor Jr., director of the William R. Harvey Leadership Institute at Hampton, said the students in attendance would soon be leaders both domestically and internationally.

“Your character will build bridges for you. … This partnership here (brings together) like-minded young adults, future leaders, who happen to come from different institutions of higher learning,” Taylor said.

At the conclusion of the event, Hurt gave the group a private Capitol tour, allowing them to go to the rotunda inside the Capitol dome. 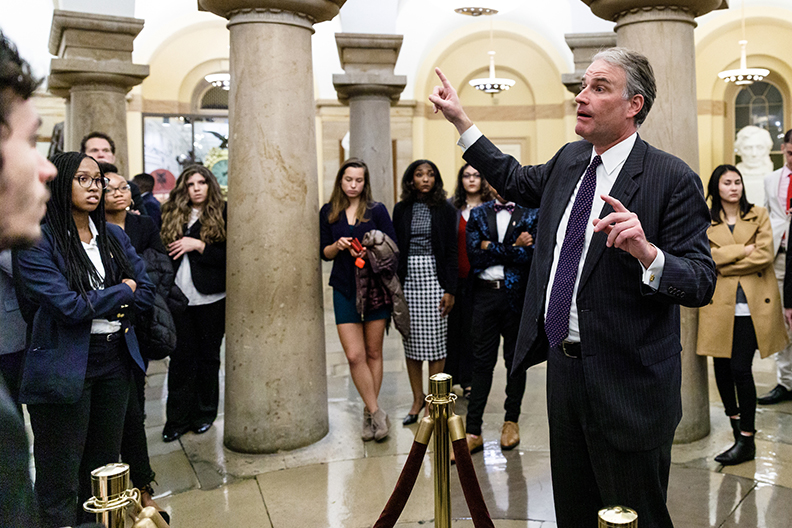 s was the second Washington Symposium this year for Liberty and Hampton in an ongoing partnership between the schools. Students traveled to D.C. in April to hear from U.S. Rep. Bobby Scott (Va.-3), U.S. House of Representatives Minority Leader Kevin McCarthy (Calif.-23), and Ja’Ron Smith, White House special assistant to the president for legislative affairs. The next Washington Symposium for Liberty and Hampton is scheduled for April 2020.