An overarching theme of living life to the fullest with disabilities was on full display in Friday’s Convocation with the appearance of Kodi Lee, the blind and autistic musician who became a viral sensation when he appeared on TV’s "America’s Got Talent" last season and was later named the winner.

Kodi opened the Convocation with three songs: “Way Down We Go,” by KALEO; “Ruin,” by Shawn Mendes; and “Counting Stars,” by OneRepublic. Kodi sang and played the keyboard, accompanied on acoustic guitar by his music teacher.

Later on, Kodi and his mother, Tina, sat down for a discussion about Kodi’s diagnoses in his early childhood and the journey that led him to the AGT stage. As a baby, Kodi didn’t squint when he was in sunlight and displayed other unusual tendencies, and Tina said that she was personally in denial that there was something wrong with him. At 3 months old, Kodi was diagnosed with optic nerve hypoplasia and Tina was told her son would be blind for the rest of his life. 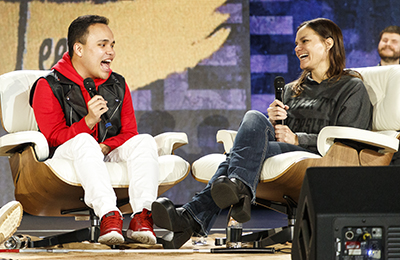 “I fell to the ground and I got on my knees and said, ‘OK, God, I completely give up and I’m going to put everything in your hands because I don’t know what to do,'” Tina said. “He carried me, and even to this day, sometimes I don’t even know how I got through a lot of it, but I know that He carried me through the hardest times.”

This led to years of beginning to teach Kodi the skills he needed to navigate the world without his sight, thanks to the help of an Orientation and Mobility (O&M) instructor who encouraged Tina to not “baby” Kodi and to challenge him and motivate him to move forward. Her perseverance became even more important when Kodi was diagnosed with autism at age 4. 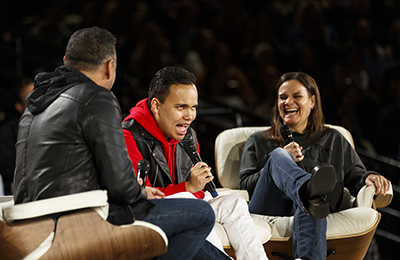 Tina shared a pivotal moment in their lives, when she discovered that music would be her son’s main outlet. She said Kodi had always loved music, but during a trip to Disneyland, Kodi started drumming on his wheelchair to the beat of a nearby acapella group. One of the band members noticed his ability to keep the rhythm and asked him to sing with them. As he sang, Kodi’s eyes were filled with pure joy and happiness, she said.

“That was the moment, my awakening. That was my answer, and I knew now how to help him through music … he was a born entertainer.”

Throughout his life, Tina has made a point to continually challenge Kodi and make a normal life possible for him in as many ways as she can. Tina said she wants to open up the world for Kodi and allow him to actively experience what is all around him.

“Just because he’s blind and autistic doesn’t mean he shouldn’t have a normal life like everybody,” Tina said. “I’m a huge believer that, since he can’t see it, I want to show it to him. I want to show him the world and show him everything.”

A video of Kodi’s adventures on campus proved this to be true. He was shown snow-tubing at the Liberty Mountain Snowflex Centre, the university’s year-round ski slope, and riding a horse, for the first time, at the Liberty Equestrian Center. He sang “Old Town Road” as he rode. 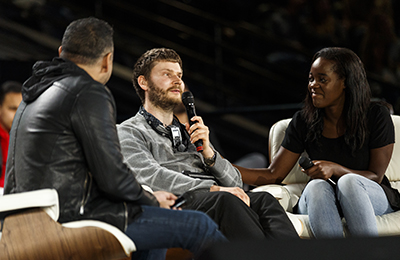 But Tina said the goal has not been an easy task, explaining that the tantrums and constant repetition of steps can be draining. To parents like herself, she offered this advice: “You can’t give up, because you’re going to hit so many walls and your child is going to tantrum ... and you’re going to feel like you should stop or that you’re hurting them,” Tina said. “They just are going haywire because they don’t understand it, and the minute you can get them to understand it, they’re going to love it.”

Continuing the message of not allowing disabilities to hold someone back from enjoying life’s adventures, Senior Vice President for Spiritual Development invited David Wilkins, a blind man who was a part of LU Send’s recent adventure trip to Israel. He had difficulty taking a trip to Israel in the past due to his needs. A Liberty student volunteered to serve him on the trip, assisted by the entire team who supported him and guided him throughout the journey.

Wilkins was born with a disease that includes the lack of retinas and also caused hearing loss. He has utilized hearing aids since the age of 13. In his approach to life, Wilkins says that the only way to live with a disability is to accept it and continually work toward independence.

“I believe that the most important thing you can do in life is to embrace it, because if you don't, you will play right into the hands of people who assume that, if you are disabled in any way, everyone needs to look after you,” Wilkins said.

The team also went in together to purchase him a top-of-the-line braille tablet that helps him read, write, search the Internet, and connect to a cell phone for messaging. 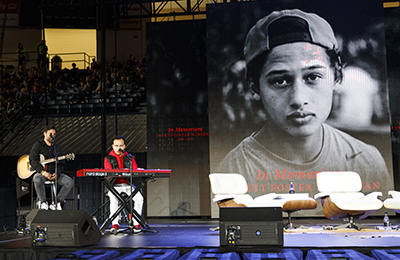 Wilkins has worked as a journalist and is pursuing a career as a motivational speaker.

To close Convocation, Nasser introduced a tribute to the late son of alumnus Toby McKeehan, Truett Foster McKeehan, who died suddenly this week. In honor of Truett, Kodi Lee chose to perform a song written by McKeehan from the young rap artist’s budding career. He then performed MercyMe’s “I Can Only Imagine” as part of the memoriam.