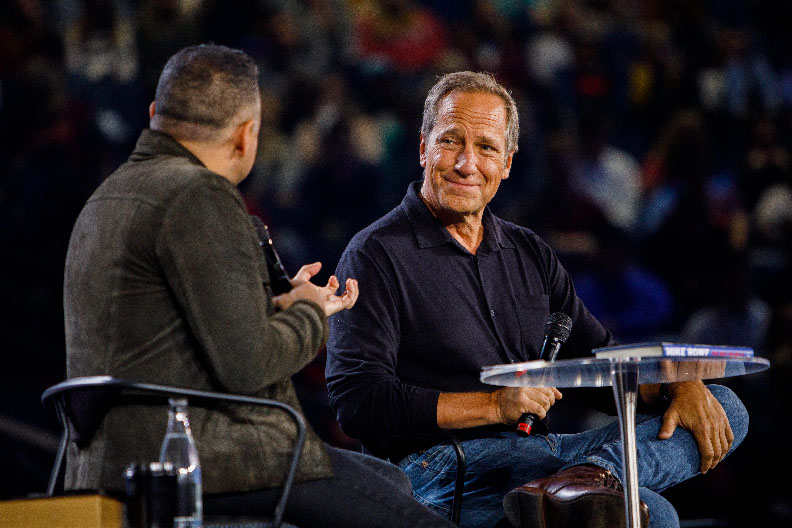 Homecoming Weekend kicked off on Friday at Liberty University Convocation with special guest and television host Mike Rowe, who shared about the value of an honest, blue-collar work ethic and how to seize opportunities to contribute to America’s backbone.

Convocation began with worship led by both current Worship Collective members and alumni returning to the stage. The group included Judd Harris, a member of Vertical Worship, which was nominated for “Worship Song of the Year” at the GMA Dove Awards this year.

Mike Rowe spoke about his upbringing, having been raised in a family and community that believed in honest work and humility. He grew up in a home built by his handy grandfather, and he said his time in the Boys Scouts of America taught him the skills and discipline that he carries to this day.

As a high school student, Rowe sat in a career counselor’s office and was shown a poster of a clean-cut man holding a college diploma on the left and a man in a messy workman uniform on the right, the caption stating “Work Smart, Not Hard.” The counselor encouraged Rowe to go to college to avoid being the one on the right, emphasizing that success solely comes with a diploma.

“He pointed to the caption and said, ‘Which one of these guys do you want to be?’ The guy on the right was basically my grandfather, the guy who built a house without a blueprint and who was heroic to me, and I couldn't believe what I was looking at.”

Rowe has used his voice in the public to discourage the notion that going to trade school is a poor decision or that working in a skilled labor position is less valuable to the American workforce. As he described it, a quarter has two sides that are equally valuable and contribute to the value of the coin, so both sides ought to be talked about.

“Education is hugely important, but there are a lot of ways to get the education, competency, and training that you need,” Rowe said. “I’m not anti-degree, but you can fall too much in love with the idea that once you get your credential, you’re qualified … and none of that means you’re competent. You can’t stop there.” 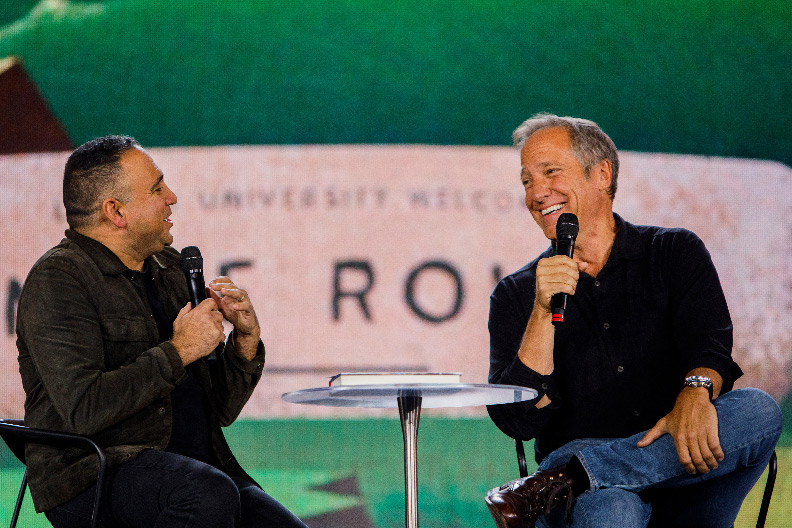 David Nasser, senior vice president for spiritual development, noted Liberty’s technical studies program and said many students are taking advantage of the opportunity to learn a trade in order to diversify, “so that their resume goes to the top of the stack.” He said Rowe’s foundation supports scholarships for students.

The value of blue-collar workmanship was the core of Rowe’s successful television show “Dirty Jobs,” which Rowe described as a tribute to his grandfather. Running for eight seasons and earning five Emmy nominations, the show became a public reminder that those who get their hands messy for a living can often have the most positive outlooks on life. Rowe recalled the careers of the men and women featured on his show, including a man named Les Swanson, a former psychiatrist who cleans septic tanks while standing in waste up to his chest.

“They didn’t follow their passion, they brought it with them. (Swanson) looked around to see what nobody was doing, then he got really good at it, and then he figured out how to love it.”

Following the airing of his first episode, Rowe said he received over 10,000 letters from people whose friends and family bring enthusiasm to their jobs, despite the fact that others might find their tasks unsightly or unappealing. Rowe described the program as an honest show with real people and real stories and said that this sincerity resonated with viewers.

“The country was anxious to tell stories about work, and what ‘Dirty Jobs’ did is show the world that there’s dignity in (any job) and that the truly great workers ... are the people who show up early, stay late, and crawl through a river of poop with a smile.”

Rowe’s new book, “The Way I Heard It,” is a memoir and also includes many of those stories. The book was available to students after Convocation.

At the conclusion of Convocation, School of Business Dean Dr. David Brat introduced radio producer James Golden. Known more commonly by the on-air name of “Bo Snerdley,” Golden is the executive producer for the Rush Limbaugh Show, the most successful radio show in history with close to 30 million listeners. Golden said he was amazed by the school’s growth since his last visit 20 years ago, and he encouraged the audience to bring Liberty and its values with them when they leave.

“When you get out into the world, you’re going to find a place that’s not so nice ... you will see manifested in front of you all sorts of things that go against your moral code,” Golden said. “Take Liberty University with you, take with you your belief in God and belief that you live in the greatest country in the world, and take your suit of armor from God throughout the world.”