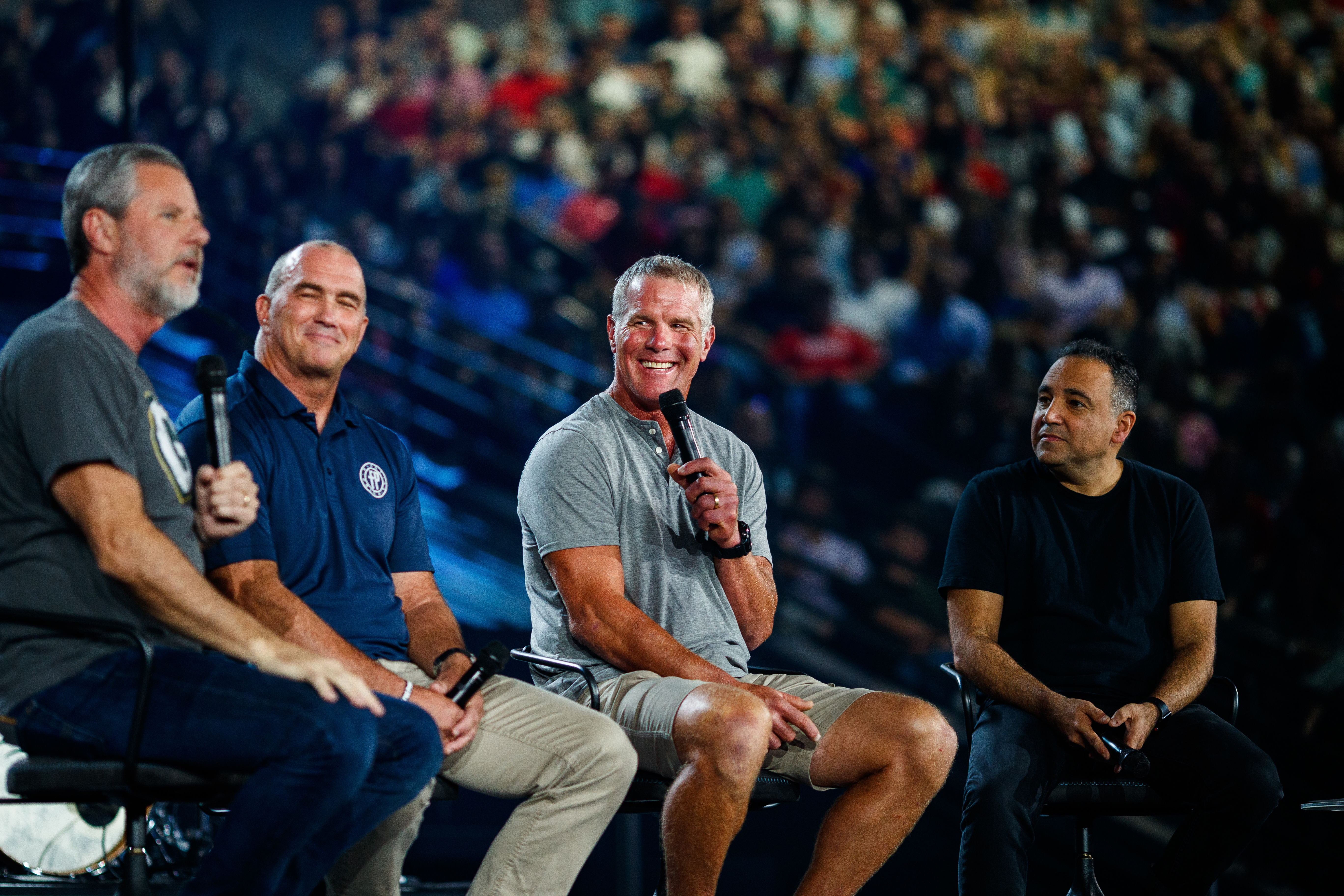 Close to 2,000 College for a Weekend guests joined students to pack the Vines Center for Convocation, where Christian band Tenth Avenue North led worship before NFL Hall of Fame quarterback Brett Favre spoke about his faith and career.

Favre recalled the humble beginning to his journey to become an NFL legend. He was overlooked by college football programs across the country until the day before Signing Day, when he received an offer from University of Southern Mississippi.

“Throughout the recruiting process, to say I didn’t get many looks or offers is an understatement,” Favre said.

Over the course of his four years at USM, Favre worked his way up the ranks of college football. His team beat the likes of Alabama and Auburn, he was a nominee for the Heisman Trophy, and he was drafted by the Atlanta Falcons with the 33rd overall pick in the 1991 draft.

In the 20 years that followed, Favre was named to 11 Pro Bowls, won one Super Bowl, earned the NFL MVP three times, and was the first quarterback in history to beat every team in the league. At one point, Favre held the records for most career passing yards and touchdowns in a career. 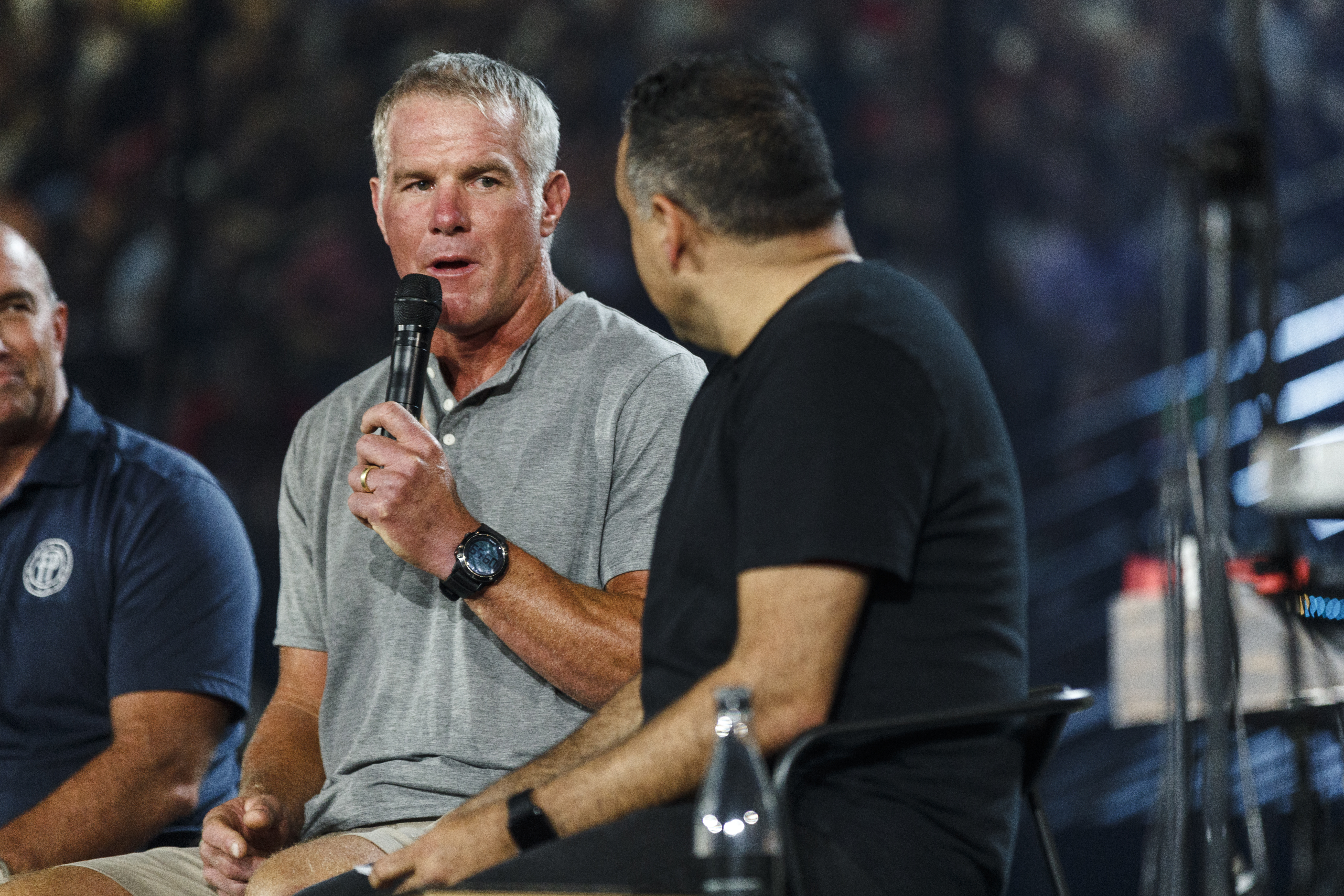 Despite his tremendous achievements, he said the performance that he is most proud of came during a regular season game in December 2003. One day after his father passed away, Favre took the field against the Oakland Raiders with the Packers in the midst of a playoff hunt. He saw the game as an opportunity to honor his father.

By halftime, Favre had thrown for 311 yards and four touchdowns with a passer rating of 158.3 — a perfect performance.

“What I realized later after I retired as I think about that game is that I, and maybe you, have oftentimes said, ‘God, show me you’re real, just for me, just for a second,’” Favre said. “You look for these signs and you never see them when they’re right in front of you, and for me the sign was how I played in that game.”

He then went on to speak about his admiration for his wife, Deanna, who battled cancer starting in 2004. Favre earned the nickname of “Iron Man” due to his resiliency and longevity in the NFL, as he set the record for most consecutive games started (297). Deanna has participated in the actual Iron Man competitions and will compete this Sunday. 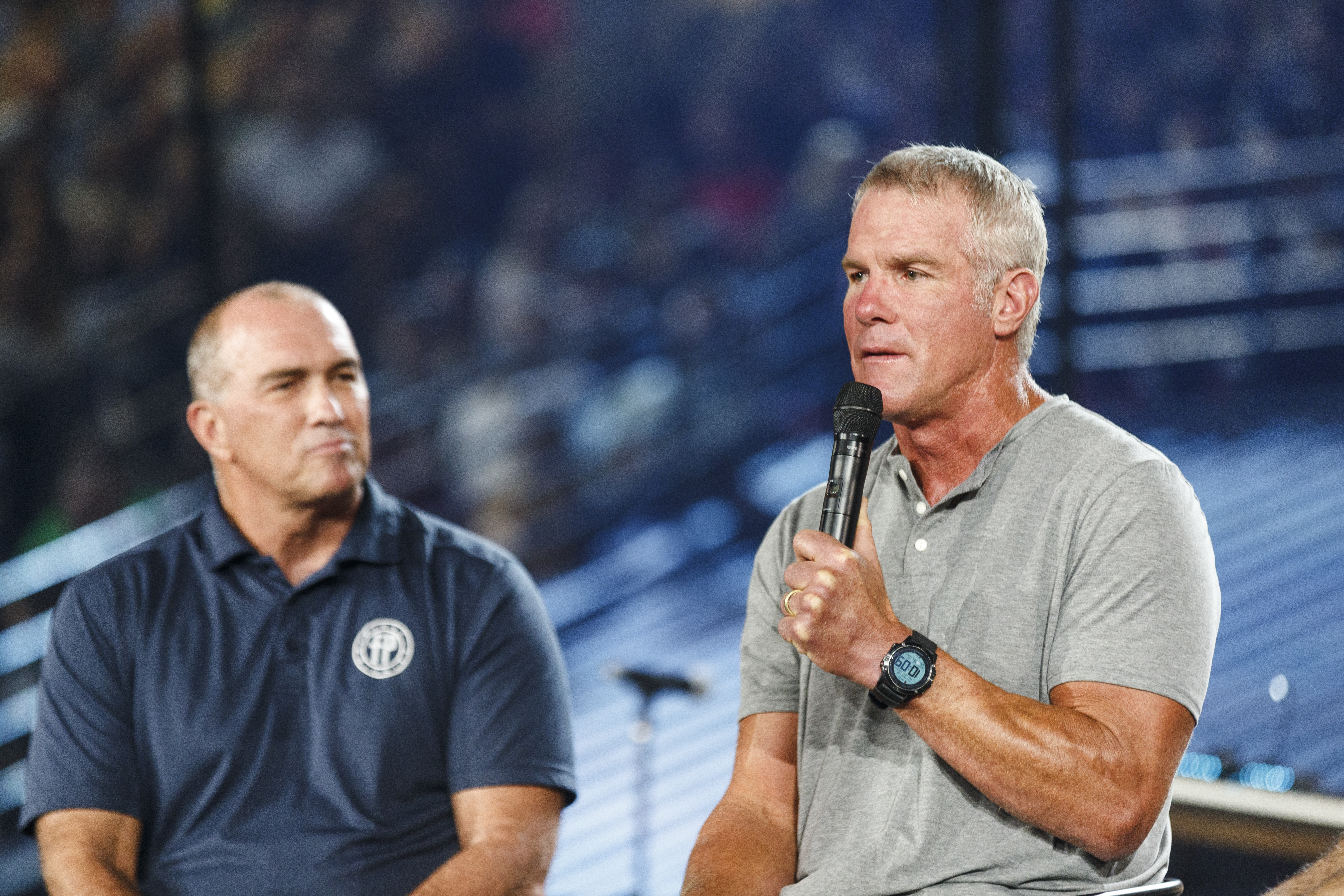 “What I’ve learned from her is she’s a heck of a lot tougher than I am,” Favre said. “She’s seen it all and fought it all and has managed to stay afloat and thrive like any good woman does.”

Students saw a clip from his induction speech at the NFL Hall of Fame in Canton, Ohio, in which he acknowledged the influence Deanna has had on him.

Favre shared the salvation message through his favorite biblical passage, the story of the criminals crucified beside Jesus in Luke 23. Both men were guilty of the crimes they were being punished for, but only one asked Christ for forgiveness.

“One was forgiven in spite of all the things he’d done ... and if he can do it, we all can, and we all need it,” Favre said. “Everyone wishes they had something that the other has, and we all have flaws. Do not try to be perfect, because it’s impossible. Be who you are and trust that God has your back.”

President Jerry Falwell, Senior Vice President for Spiritual Development David Nasser, and a close friend of Favre’s, JD Simpson, joined Favre on the stage for the discussion. Simpson is the executive director of First Priority, an organization based in Hattiesburg, Miss., that helps Christian high school students minister to their peers.

“Every four weeks, on a local high school campus all across America, students are sharing their faith and inviting their friends to come to Christ,” Simpson said. “It’s student-led, student-initiated, and we would not be where we are if it weren’t for Brett and Deanna.” 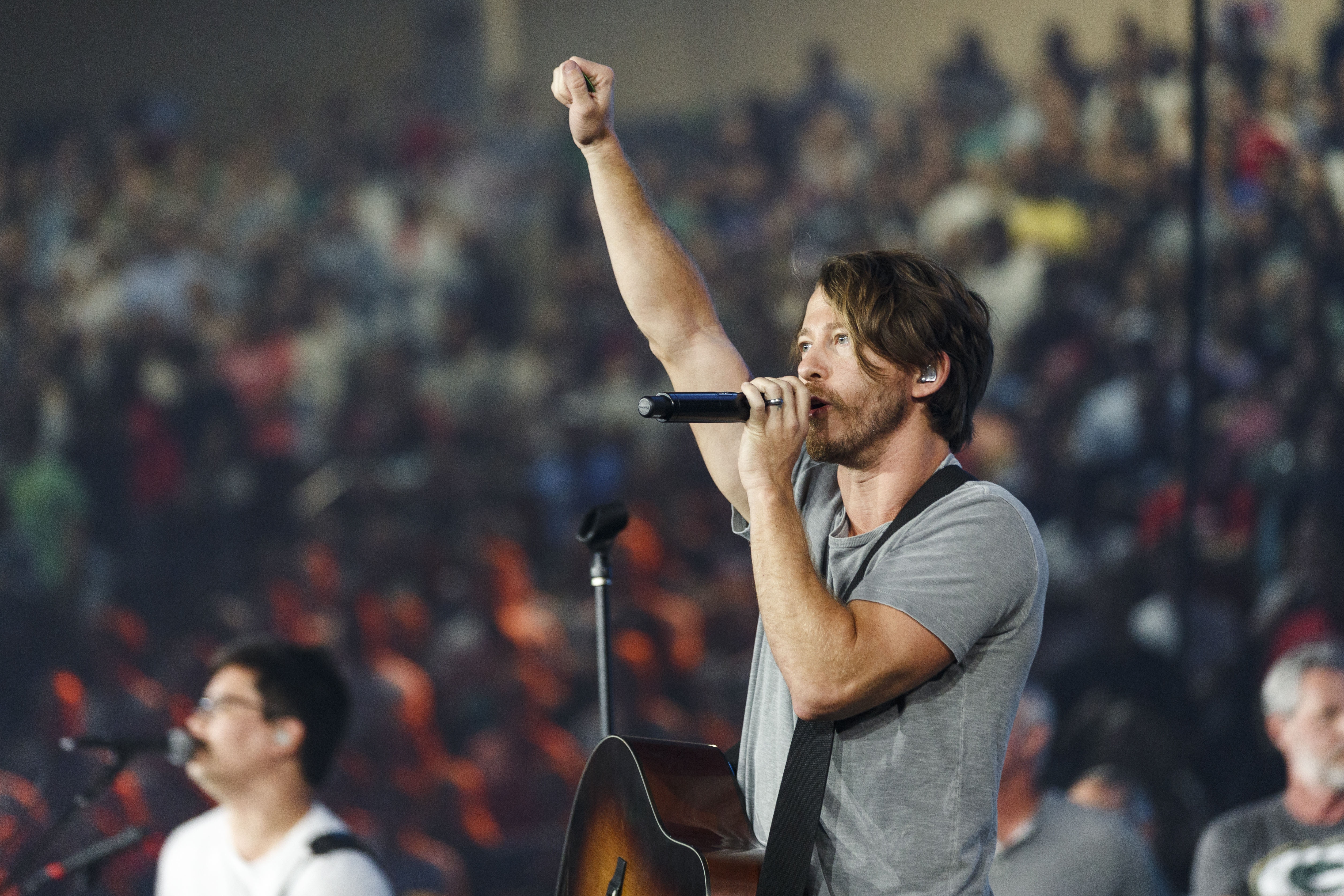 In the final minutes of Convocation, the guests played a game reminiscent of the videogame Duck Hunt, in which the players threw footballs at moving targets, with Nasser, President Falwell, and Falwell’s wife, Becki.

During the Convocation, Nasser gave an update on Liberty’s status in helping hurricane victims in the Bahamas. An LU Send Now team comprised of mostly Bahamian students will soon deploy to offer physical aid and reunite with loved ones. All students were encouraged to help recovery efforts by bring gently used shirts and pants to Campus Community next week.

Tenth Avenue North is returning to the Vines Center for a concert at 7:30 p.m. later Friday night.