Representing opposing sides of American politics and social issues at Friday’s Convocation, Dr. Robert George of Princeton University and Dr. Cornel West of Harvard University emphasized to Liberty University students the necessity for healthy discourse and intellectual humility when they find themselves in disagreement with others.

The two esteemed scholars and authors first met as faculty members at Princeton and, despite their disparity in perspectives on many issues — George a conservative and West a liberal — they found themselves engaging in meaningful conversation. The relationship began when they interviewed one another for a student magazine.

“We were supposed to talk for an hour, but we talked for four,” George said. “The recording machine ran out, but we kept on going because once we were in it we couldn’t stop, and we still haven’t stopped.”

They began teaching a course together at Princeton and most recently have launched a touring lecture series titled “Civility in America,” which encourages those who find themselves on opposing sides of the political spectrum to use respectful conversation and love for one another as means of ultimately seeking the truth. Their stop at Liberty, with over 12,000 students in attendance, has been their largest audience to date.

West said it ultimately comes down to love, which is a matter of “respect, protect, but also correct.”

“All of us need to be pushed so that we don't in any way accommodate ourselves to an empire or any form of ideology that loses sight of the humanity of people,” West said.

“There is nothing more important than truth, and if he has moved me from error and falsehood to truth then he has been the greatest friend a guy could ever have,” George added. 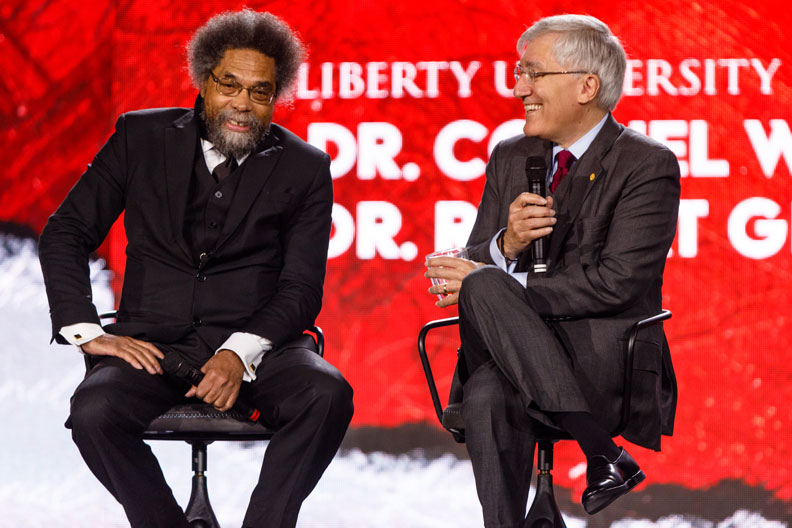 The two men are also linked by their shared faith in God, and regardless of the disagreement that springs from politics, they use their commonality in Christ to ground the conversation.

“I think (George) is wrong on a number of issues, he thinks I’m wrong on a number of issues, but we revel in each other’s humanity and we meet each other at the foot of the cross,” West said. “All of us fall short of the glory of God and the standards that have been bequeathed to us, and yet we are fortified and we put on the whole armor intellectually, morally, politically, and socially.”

West and George acknowledged that the sphere of education is becoming dangerously closed off to outside ideas, and George warned about the harm that can come from indoctrination.

Toward the end of the conversation, George took the time to congratulate Liberty and its students and faculty for the way they have received “so many people here representing such a spectrum of views.”

“I was so proud of you when Bernie Sanders came to speak and he was treated with respect and he was engaged and taken seriously. … You’ve got to keep up that spirit of openness and being willing to engage,” George said. 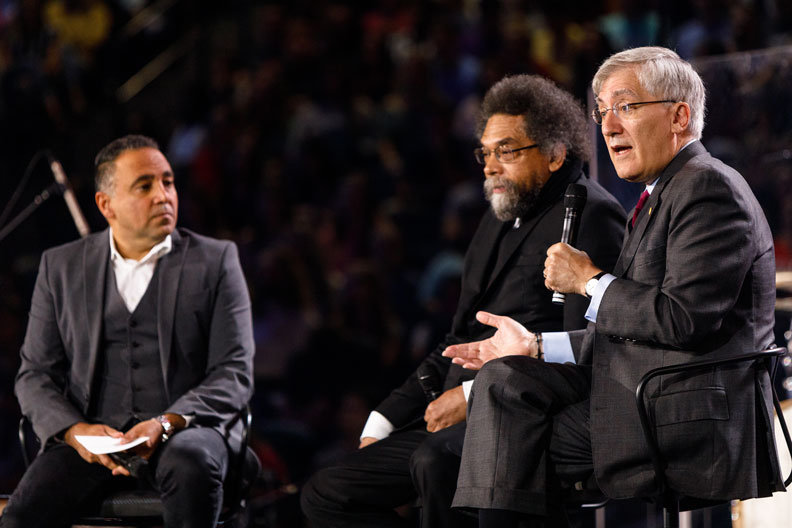 George acknowledged that his views were probably received differently at Liberty than at many other schools, but if there was a poll taken of the audience at Convocation, the majority would most likely agree with him more than West. He cited this as a precious opportunity to learn and grow.

“Probably the majority of students would agree with me on most of the issues and not Cornel, but what that tells me is the guy you have more to learn from is him because he will challenge you,” George said.

“And we learn from each other,” West said. “I’ve got a whole lot to learn from Liberty University.”

West noted that Liberty has acquired a reputation of specific political associations and biases, but what lies underneath is something different.

“There are such superficial stereotypes that are out there, so when people think of Liberty University, they automatically associate it with various stereotypes,” West said. “Once you get beyond that stereotype, what do you see? All of these complicated human beings — and that needs to surface more in a powerful way.” 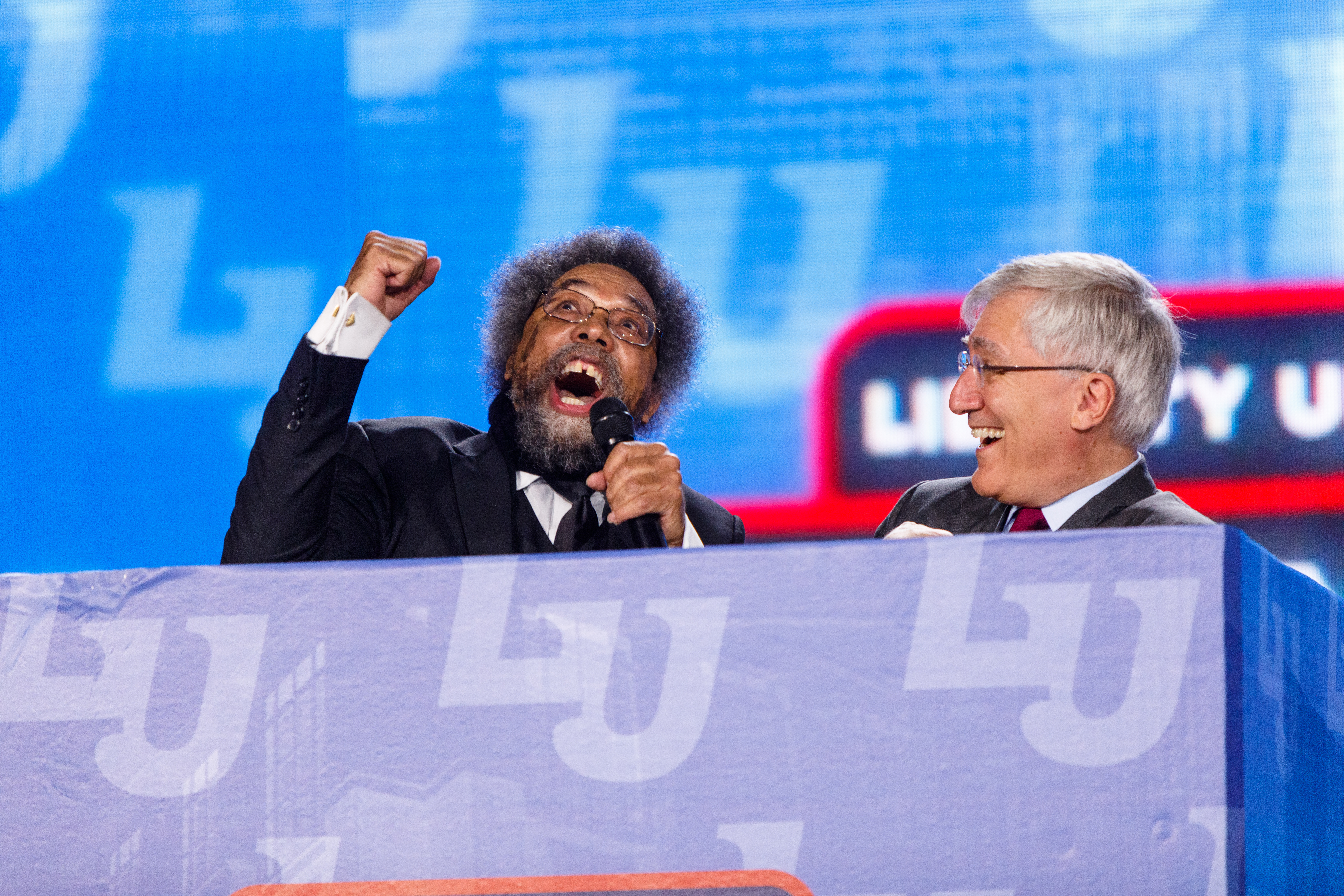 e them and that the school is willing to learn from them.

Ultimately, West and George emphasized the concept of agreement through truth and Christ, and they shared encouragement to stand strong in those beliefs.

“You will be tempted to go along with what you know or deeply believe to be wrong for fear of being accused of hatred, bigotry, and hating somebody,” George said. “When Cornel and I disagree, we are not enemies trying to defeat each other; we are friends joined together in the common pursuit of truth.”

Nasser said that he was excited to have these two voices come to Liberty, as this will likely be one of the most practical Convocations of the year, and he was excited for them to meet, "the most gracious, honorable students in the world."

"Our guests are typically blown away by the spirit of this place," Nasser said. "Many are used to college campuses being hostile environments and are shocked to instead experience such genuine hospitality."