The first week of Convocation at Liberty University continued on Friday with lessons in turning to God for guidance in times of turmoil and uncertainty from country music artist Jo Dee Messina and Dr. William R. Harvey, president of Hampton University in Virginia.

Messina, who has sold over 5 million albums and was the first female country artist to have three consecutive No.1 hits, joined Liberty’s Worship Collective for the opening songs before sitting down with Senior Vice President for Spiritual Development David Nasser for an interview.

The country singer acknowledged the incredible opportunities she had when she was a rising star and recounted a moment from when she took the stage at Texas Stadium with George Strait and The Dixie Chicks in front of roughly 70,000 fans. She stood in front of the massive crowd, their mere presence shaking the concert venue and filling her ears, and was at the climax of her career to that point — but she said she felt out of place.

“I said to myself, ‘This is it, I’ve worked my whole life for this very moment ... but I don’t belong here, and something’s missing,’” Messina said.

She then shared about a particularly dark time in her life when her mother, who Messina described as a core fixture in her life, experienced serious health issues with countless complications. Together with marital problems, Messina said her life turned into a cloud of darkness.

“One day I was on my front porch and I looked at my husband and I said, ‘If I don’t wake up tomorrow, I’m fine with that,’” Messina said. “I physically felt the weight of the world … I was hunched over and just beaten down.”

That same night, as she sat on the porch feeling more alone than she ever had before, she felt a presence join her. Not with her eyes or her ears, she sensed something saying, “No, she’s mine.” As she described it, she knew it had to be Jesus.

In the time since she accepted Jesus, Messina said that she has looked at the life she has always had around her in a new light — her family, her career, and even her songs. Her hit song with Tim McGraw “Bring On The Rain,” which began as a song about personal strength and resiliency, has become a reminder for her to face the trials of life and trust in God to protect her. 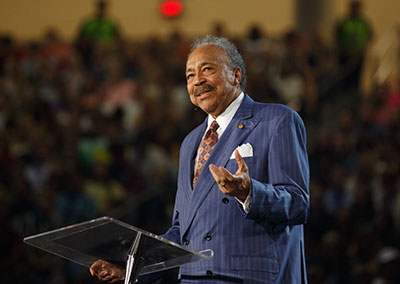 President Jerry Falwell then introduced personal friend and fellow university president Dr. William Harvey, who has been at the head of Hampton University for 41 years.

“There’s about a handful of college presidents I got to know when I became a president myself 12 years ago who have become mentors to me and who I’ve learned so much from, and President Harvey is at the top of that list,” Falwell said. He added that Hampton, in his opinion, is the most successful, both academically and financially, historically black college and university (HBCU) in the country.

Harvey delivered a message of encouragement and guidance to become successful in the professional world and in everyday life.

Having grown up in Alabama in the times of segregation, Harvey said he was able to see firsthand the vital importance of quality leadership. Harvey’s parents were hosts to many African American civil rights leaders at the time, including Dr. Martin Luther King Jr. and Rev. Ralph Abernathy, and Harvey said that’s when he learned the value of listening rather than talking.

His parents also taught him how being of service is key to being a successful leader, and he stated that honest character and integrity should be at the core of every individual in power.

When the figurative curtain of college life rises and as the students enter the stage of professional life, Harvey stated that life will be different and they will have to rely on their own performance and beliefs.

Students have heard a consistent message in the initial week of Convocations: build your life upon God, look to him in the darkest of times, and display your Christian character everywhere you go. Wednesday’s opening Convocation featured MyPillow inventor and CEO Mike Lindell. On Thursday, Darrin and Amie Patrick joined Convo Select for a special talk on the enneagram through a biblical perspective.