Liberty University welcomed its largest-ever graduating class — 6,350 students — at 2009 Commencement exercises on Saturday, May 9. Under sunny, blue skies Arthur L. Williams Stadium was filled with 3,390 graduates and more than 23,000 friends and families of graduates.

Chancellor Jerry Falwell, Jr., began his address to the graduates by acknowledging and thanking parents and grandparents for entrusting their children to Liberty. He also spoke about how this year’s graduates were part of Liberty during a transitional time.

“The Class of 2009 was one of the last classes to benefit from my father’s messages of encouragement to persevere in everything they do. They also experienced the first two years of Liberty’s second generation,” Falwell said.

He charged graduates to carry the vision and mission of LU to the world as champions for Christ.

Falwell said he believes that these graduates will become the “movers and shakers” of this generation, and he hopes and prays Liberty was able to prepare them for the challenges ahead.

He closed with sincerity and a bit of joking, “We deeply love all of you, and now that you’re alumni, don’t forget to send money.” 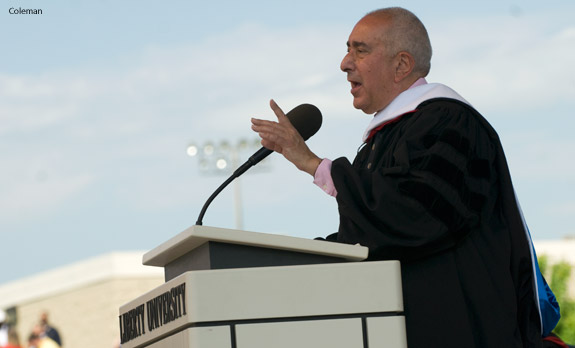 The man known for his “Clear Eyes” commercials, monotone delivery of classic lines in “Ferris Bueller’s Day Off” and his game show persona on “Win Ben Stein’s Money” showed the more serious side of himself as guest speaker at Liberty University’s 2009 Commencement.

Ben Stein — accomplished scholar, attorney, writer and actor who attended Yale Law School — delivered a message of creationism, patriotism and value for humanity to graduates and their families on Saturday, May 9, at Williams Stadium.

“Today is historic because it’s the first Commencement address delivered in sneakers,” Falwell joked as he invited Stein to the podium, just moments after Liberty University conferred an honorary Doctorate of Humanities to him.

Stein, 64, spoke of LU founder Dr. Jerry Falwell as a great man and praised the university for its support of Israel, the unborn, family values and morality.

He spoke extensively about his work on “Expelled: No Intelligence Allowed,” a documentary exposing the flaws of Darwinism and showing how the scientific community discriminates against scholars who believe in creationism.

“I realized that the real issues of life were not economic issues, not necessarily material issues, but metaphysical issues,” he said, later explaining how looking at life as merely “animated mud” rather than a God-given divine experience could impact human behavior and morality.

After his documentary went public, Stein said the reception was fiercely critical.

“The name-calling was beyond anything I’ve ever seen, and I’ve worked for Richard Nixon, and I’ve been called a lot of names,” he said. “But I’ve never seen the [kind of] anger directed at this movie and at yours truly.”

Stein received a standing ovation for his remarks.

Though Stein does not share all of the same views as Liberty University, Chancellor Falwell said one of the major reasons he invited Stein to speak was because of his documentary.

When Falwell first announced that Stein would be delivering this year’s Commencement address, he said: “His work in exposing how fraudulent science is being used in this country to destroy freedom and advance tyrannical social and political agendas deserves our attention and respect.”

Look for more on Commencement, including more photos, in the upcoming June/July issue of the Liberty Journal.