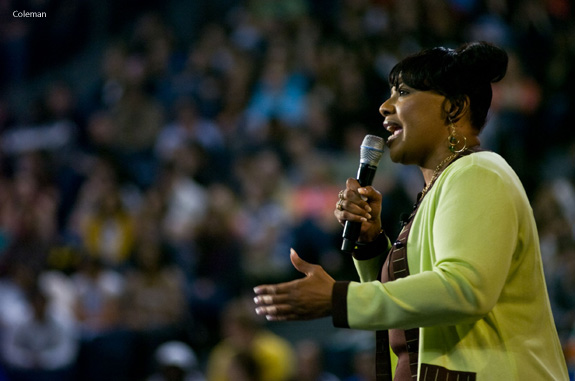 Liberty University had the privilege on Friday of hosting a dynamic woman who represents two Kings.

Bernice Albertine King, the youngest daughter of renowned preacher and civil rights leader Dr. Martin Luther King, Jr., spoke at convocation about her dual role as a representative of her father’s “King” legacy and also as a servant of the Lord — the ultimate King of Kings.

“Today is a special day that we’ve waited for all year. We’ve looked forward to this,” LU Chancellor Jerry Falwell, Jr., said in his introduction.

Later, Falwell said that he believed Bernice King helped "to bridge the divide that was created between different groups of students during the 2008 election season. For example, she gave a strong Gospel message today. African American Christians and white Christians have been separated into different political camps in the last generation or so but they share many of the same core values, especially when it comes to social issues like abortion, marriage and school vouchers."

Like her father, King is a servant of Christ and highly-educated, holding a master's degree in divinity from the Candler School of Theology and a juris doctorate from Emory University School of Law. She is also an eloquent orator who spoke before the United Nations when she was only 17.

Since that time, King has spoken everywhere from The White House and the Department of Defense to the headquarters of DuPont, AT&T, NIKE and The Salvation Army. She has appeared on the Oprah Show, CNN and BET, and she has been featured in magazines such as “People,” the “Ladies Home Journal” and “Charisma.”

She said the Holy Spirit has revealed to her the unique meaning of her initials, B.A. King. For her, “Be A King” means that she — and all believers around her — should not shy away from their rightful place as a representative of Christ. God made His people to be kings and priests on the earth, she explained in her convocation message. As believers, she said, people can act from a place of authority if they’re living in God’s will and motivated by him.

“There has to be a consciousness of the fact of who they really are,” she said of believers.

Her father, following Christ above all, was a king on earth, she said. When he spoke, people took action, and attitudes began to change. She even went a step further and called her father a prophet.

“I believe that my father was perhaps the only national prophet sent to America,” she said, recalling how he challenged America to live up to its Judeo-Christian roots both through his words and actions.

The legacy of Dr. Martin Luther King, Jr., is much broader than his “I Have a Dream” speech, she said. He understood that he was acting under the authority of Jesus Christ and the Holy Spirit.

Everyone has a duty to understand that God is calling for kings in the earth, she said, referencing Jesus as the “King of kings and Lord of lords.”

She called Liberty University a place for “kings-in-training.”

“You are very blessed and highly favored to be at an institution such as this. … Bloodlines have been blessed through this institution,” she told the students.

Kings have great authority, she said, adding that one of the most potent weapons God has given them is their mouths — to speak up. Speaking can make things happen, and she said it can also inspire creativity, just as God’s act of speaking brought the earth into existence.

God’s people need to find their territory of action and begin operating toward their divine assignment, she said. For someone who doesn’t know what it is, she said it helps to take an inventory of the events in your life and figure out the direction that the hand of God has been guiding your path.

The time is coming in America when Christians will be persecuted, she said. People have spent too much time caught up in denominationalism, King declared, saying that God is looking for his people to have one voice united for him. Right now, she said, Christians aren’t exercising a strong influence in the entertainment industry, education, politics or even family values.

Believers must accept their identities as kings of the earth and future residents of God’s kingdom, she said, and they must take a stand for what they know is right.

“Accept your identity. You’re a king. Don’t ever see yourself as a subject. You’re not subject to anything but Jesus Christ and his Holy Spirit,” she said. “… All you have to do is know who you are [in Christ].”

In addition to her busy schedule as a popular speaker, Bernice King now serves full time at the New Birth Missionary Baptist Church in a suburb of Atlanta. She is also a member of the State Bar of Georgia. 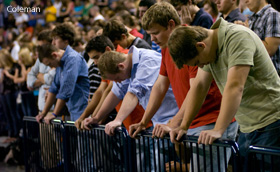 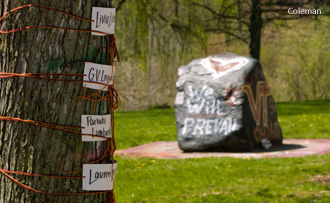 Left, two years and one day after the Virginia Tech campus shootings, LU pastor Dwayne Carson led Liberty students in a prayer of remembrance for those touched by the tragedy at Friday’s convocation. Right, LU's spirit rock is painted for the two-year anniversary and ribbons with victims' names are tied to a nearby tree. 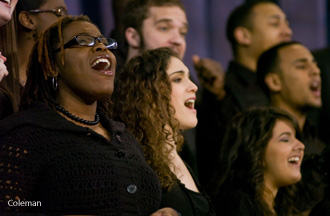 LU Praise, a multicultural singing group from Liberty’s Center for Worship, delivered a powerful song of praise in their signature gospel style just moments before Bernice A. King took the stage at convocation.