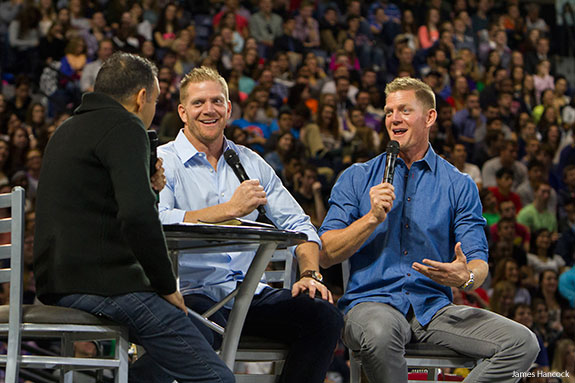 Twin real estate moguls Jason (left) and David Benham, both graduates of Liberty University, talk about their commitment to faith during Convocation on Oct. 8.

Liberty University students were challenged to stand on principle and live out their faith during Convocation on Wednesday, as guest speakers shared their stories of forfeiting worldly success in order to follow God’s calling. Students were encouraged by the Lord’s blessing in the lives of twin entrepreneurs and Liberty alumni Jason and David Benham (’98), as well as Josh Rutledge, the executive pastor at Christ City Church in Birmingham, Ala., who have all made that decision.

The Benham brothers described their journey as vocal followers of Christ in the media in a roundtable Q-and-A with Senior Vice President for Spiritual Development David Nasser. They tackled topics from biblical business practices to enduring spiritual opposition, recounting their experiences with HGTV earlier this year.

David Benham explained how voicing their beliefs about issues such as abortion and homosexuality resulted in the cancellation of the reality series, “Flip it Forward,” in the middle of filming. HGTV producers were aware of the brothers’ faith before signing them, but when an activist group began to apply pressure, the network instructed David and Jason to keep their faith quiet — something they couldn’t afford to do.

“We knew at that point, the battle is on,” David Benham recalled. “We were sitting there with an opportunity to basically back off or stand strong … it was at that moment that Jason leaned in and said, ‘We are not bowing to any agenda; we are going to speak the truth of God; we are going to do it in love … but we are not going to back off.’”

Shortly after that meeting, the show was canceled, drawing a lot of media attention.

The brothers, former Flames and professional baseball players turned real estate tycoons, shared how success has followed them as a result of their four biblical principles for life, family, and business: being faithful in every responsibility, giving rather than receiving, contributing more in value than you expect in payment, and breathing life into others in every setting.

“You want to be the person that, wherever you go, life follows you,” Jason Benham said. “Wherever you go, you bring the dead to life, because that is the Christ in you.”

David Benham stirred students to hold uncompromisingly to their faith, explaining how the biblical story of Daniel helped them during the HGTV controversy. In the same way that Daniel prayed faithfully when ordered not to, the brothers continued speaking the truth in a loving way when asked to compromise.

“Today is the day for you to purpose in your heart and to choose who you are going to serve,” David Benham said.

They challenged the students to commit to reading through the entire Bible each year, as they have done ever since attending Liberty, to help them remain disciplined and grounded in their faith.

Before the Benham brothers began their discussion, Nasser introduced Josh Rutledge, who ministers at the church where Nasser himself served before coming to Liberty. Rutledge briefly shared his testimony, recalling the trials he faced as he left his dream job to follow God’s calling to inner-city ministry. Rutledge told students they are equipped with the correct answers, but they should seek out those who test their knowledge with tough questions.

“When you let the experience of other people come into life, it will break your theology in half,” Rutledge said. “(Then) what God will do is build you into something stronger.”

Following Convocation, the Benham brothers shared tips for success with students in the School of Business and met with students in the School of Communication & Creative Arts to answer questions about career and marketplace missions. The brothers’ organization, Benham Companies, is franchised in 100 locations across 35 states and is recognized as one of the top 25 small businesses in America.

Tomorrow the brothers will visit the Liberty Flames Sports Network studio for an appearance on Game On, a 30-minute daily sports show produced by the network.