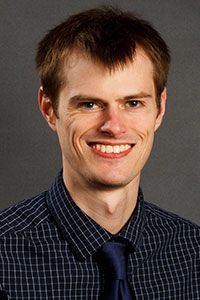 Dr. Brynteson was born in Norfolk, Virginia. He is the oldest of three siblings (2 brothers and 1 sister). At age 15, his family moved from Virginia to Rockford, Illinois, which is where he finished high school and attended college at Rockford University. During his time at Rockford University, he had the opportunity to teach high school math and chemistry at a local private high school. The great experience from teaching high school classes led him to pursue a career in teaching at the college level. After earning his Ph.D. in chemistry from the University of Chicago in 2014, he moved back to Virginia to teach chemistry at Liberty University.

His research focusses on studying the gas-phase unimolecular dissociation dynamics of vibrationally excited radicals. Radical decomposition is a very important in better understanding combustion, explosives, and the chemistry of the atmosphere. Better understanding the product-branching resulting from gas-phase radical decomposition will allow for improved atmospheric models, cleaner combustion, and improved design of explosives.