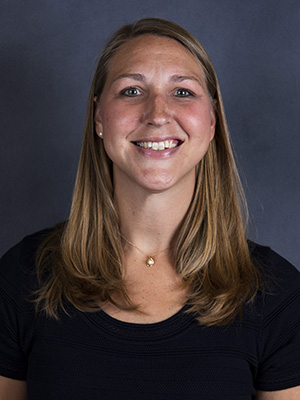 Liberty Athletics Hall of Famer Katie Mattera is returning to her alma mater as a women's basketball assistant coach in 2019-20. In this role, she will primarily coach the Lady Flames' post players.

Mattera previously served six seasons (2012-18) as head women's basketball coach at Cornerstone University in her hometown of Grand Rapids, Mich. She posted a 112-78 coaching record and guided the Golden Eagles to a pair of NAIA National Tournament appearances (2014 and 2018) and the 2018 Wolverine-Hoosier Athletic Conference (WHAC) Tournament title. Mattera was named the WHAC Champions of Character Coach in both 2017 and 2018.

The 6-8 center became the Lady Flames' first NCAA Division I All-American, earning Associated Press honorable mention recognition as both a junior and senior. She was the first-ever three-time Big South Women's Basketball Player of the Year (2003, 2004 and 2005) and was named Big South Championship MVP during each of those seasons as well.

After graduating from Liberty in 2005, Mattera embarked upon a successful professional career. She was selected with the No. 8 pick in the first round of the 2005 WNBA Draft and went on to be a unanimous WNBA All-Rookie Team selection for the San Antonio Silver Stars. Mattera played five total seasons in the WNBA, totaling 1,000 career points and helping the Detroit Shock reach the 2007 WNBA Finals.

Mattera and her husband, Todd, have two sons, Liam and Jace.