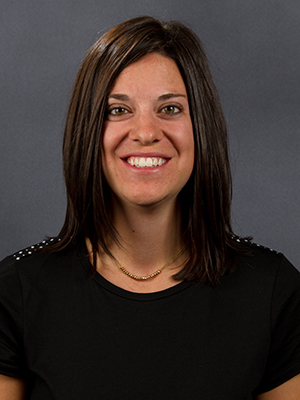 Sarah Boruta is in her ninth season on the Liberty women's basketball staff as director of operations. In that role, she is responsible for the daily operations of the program, including the logistics of budget, game-day management, coordination of managers' duties, team travel arrangements, scheduling of games, equipment coordination and overseeing video technology.

Boruta serves as director for the Lady Flames' summer camps, which have seen an 800 percent increase in campers since her arrival at Liberty. She also oversees the team's outreach activities, including postgame clinics and community service events.

Boruta is an active member of Women Leaders in College Sports (formerly known as NACWAA) and the Women's Basketball Coaches Association (WBCA) and has presented at both organizations' conventions. She is a 2015 graduate of the NACWAA Institute for Administrative Advancement (IAA) and was nominated for the Judith M. Sweet Commitment Award that NACWAA presents each year to an athletics administrator below the senior ranking level who is committed to providing high-level leadership and guidance within intercollegiate athletics, goes beyond the call of duty, and provides outstanding service to their organization.

At Ferris State, Boruta organized the Bulldogs' summer camps and clinics, while coordinating video exchange. She also designed marketing and promotional materials for the team.

Boruta has worked with some successful teams, including three straight Stanford squads which reached the Final Four of the NCAA Division I Women's Basketball Championship. The 2009-10 Cardinal finished as national runner-up. Additionally, the 2006-07 Ferris State team won a school-record 23 games and advanced to the NCAA Division II Women's Basketball Championship's Sweet 16 round.

Boruta owns four degrees, including both an associate's degree in visual design and web media (2006) and a bachelor's degree in graphic design (2008) from Ferris State. She went on to earn a master's degree in sport management from California (Pa.) in 2010 and received an MBA from Liberty in 2017.