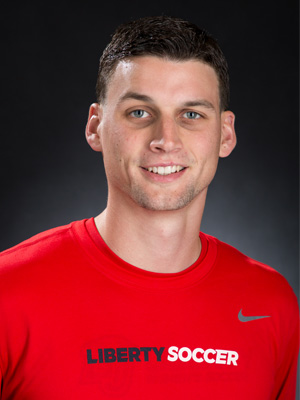 West comes from Eastern University in Pennsylvania where he was the women' soccer head coach for the past two seasons. Under his leadership, West guided his team to the conference playoffs in back-to-back seasons for the first time in five years. In addition to being the head coach, West also served as the Assistant Athletic Director of Facilities at Eastern.

West brings a wealth of experience to Liberty as he also worked on the men's soccer side serving as the goalkeeper coach at Eastern and was an assistant coach at Messiah College. West is well-connected in the recruiting field, having worked at the academy level with Dillsburg Area Soccer Club and the Falcon Soccer Academy.

West played collegiate soccer at Messiah College from 2011-14. During his time at Messiah, West was the starting goalkeeper that led his team to the Division III National Championship in back-to-back seasons in 2012 and 2013. West was a NSCAA All-Region selection and was named to the NCAA All-Tournament Team in 2012. West is married to his wife Alicia and welcomed their first child, Hayden, in December of 2019.

West at a Glance