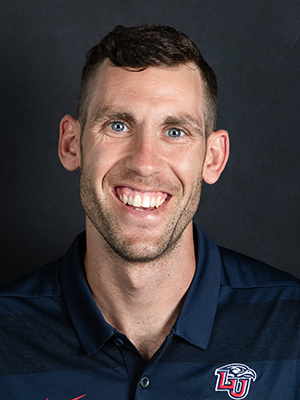 Former Liberty standout Isaac Wendland returned the Flames as an assistant track & field/cross country coach in January 2019. In his role, he primarily works with the men's distance runners.

Since graduating from Liberty in 2013, Wendland gained experience coaching high school runners in the Lynchburg area. For five seasons (2014-18), Wendland worked as an assistant coach for the Jefferson Forest boys' and girls' cross country teams.

The Jefferson Forest girls' squad placed inside the top seven at the VHSL state meet every season Wendland was on staff. Meanwhile, the boys' team placed fifth at the 2018 VHSL Class 4A state meet, recording the highest finish in school history.

Wendland's stellar senior track & field season at Liberty in 2013 took him all the way to the NCAA Division I Outdoor Track & Field Championships in the men's 1,500. That spring, he also won the IC4A men's 1,500 title and swept the Big South men's 800 and 1,500 crowns. Wendland was named to the USTFCCCA All-Academic Team for the second time in his career (also 2010).

In cross country, Wendland played a key role on Liberty's 2011 Big South championship team. He stepped up for an 11th-place finish with an 8K personal-best time of 25:09 at the event.

Wendland clocked 2:49:48 for his debut marathon in 2019, successfully qualifying for Boston.

A native of Charles City, Iowa, Wendland was one of the most decorated runners in Iowa high school history. The Lighthouse Academy graduate became the first male to win the Iowa state 1,600-meter title four years in a row. He also claimed three state 800 crowns, three state sprint medley relay championships and a trio of state cross country titles. As a result, Wendland was inducted into the Iowa Track & Field Hall of Fame in 2018.

Wendland graduated from Liberty in 2013 with a bachelor's degree in pastoral leadership. He served as youth pastor at Brookhill Church in Forest, Va., from 2012-18.

Wendland and his wife, Libby, reside in the Lynchburg area with their daughter, Eden and son, Asher.