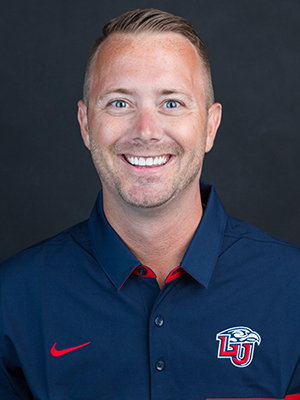 Shawn Venable joined the Liberty track & field staff as an assistant coach for jumps and hurdles in the fall of 2016, after spending the previous four seasons at Oral Roberts. In January 2018, he added the title of recruiting coordinator.

In 2020, Jovaine Atkinson and Makenzy Mizera headlined Venable's training group. Atkinson won the ASUN men's 60 hurdles title and ranked No. 18 nationally in the event. Mizera was the ASUN women's long jump champion during a season where she took down program records in both the long jump (19-4.75) and triple jump (41-10.75).

Venable also the rapid development of a trio of men's freshmen. Erick Johnson added a foot to his long jump personal best to win the ASUN title at 23-8.75. Felix Lawrence dropped his 60 hurdles time from 8.21 to 7.95 during the season. Meanwhile, high jump novice Quinten Clay reached 6-8.75.

During 2018, Venable coached Jovaine Atkinson to a fourth-place finish in the NCAA men's 60 hurdles final and a record-breaking time of 7.64. He also helped Darrel Jones close out his collegiate career with a trip to the NCAA Division I Outdoor Track & Field Championships in the men's triple jump. Kimone Green and Branson Rolle swept the Big South women's and men's 400 hurdles title and each qualified for the NCAA Division I East Preliminary Round meet, with Rolle doing so as a true freshman.

Venable served as assistant track & field coach/recruiting coordinator for Oral Roberts, focusing on the jumps, hurdles, short sprints and throws. He coached a number of standout performers, including two All-Americans, eight qualifiers to the NCAA Division I West Preliminary Round meet and 13 Southland Conference champions.

Prior to his time at Oral Roberts, Venable spent five seasons (2007-12) as head track & field/cross country coach at Bacone College. He reestablished the program in January 2007 and quickly guided his team to success. The Bacone men's track & field team captured Red River Conference titles in both 2009 and 2012, and Venable was named Red River Conference Coach of the Year both times. Additionally, his men's track & field squad placed inside the top 25 at both the NAIA Indoor and Outdoor Track & Field Championships in 2012.

Venable began his collegiate coaching career at his alma mater, Oral Roberts, working as a volunteer assistant track & field coach for the 2005-06 season.

As an athlete, Venable started out as a middle and long distance runner at Oral Roberts before transitioning to the pole vault and decathlon later in his career. He served as team captain and earned two Mid-Continent all-conference honors as a senior. During Venable's time on the squad, Oral Roberts captured four Mid-Continent Conference championships.

The native of Owasso, Okla., owns three degrees and is working toward a fourth. He graduated from Oral Roberts with a bachelor's degree in theology – New Testament Biblical literature in 2005. Four years later, Venable earned a master's degree in theology – Judeo-Christian Studies from Oral Roberts. He then graduated with a master's degree in secondary education – sports administration from East Central University in 2018. Venable is currently beginning work toward a Ph.D. in educational leadership at Liberty.

Venable and his wife, Ashley, have three sons, Keegan, Kolton and Kingston.