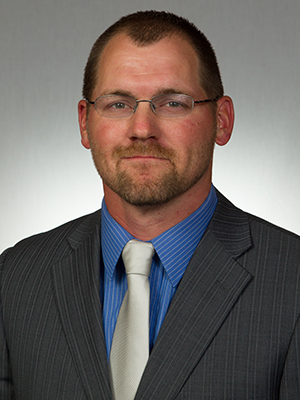 Clendon Henderson has served on the Liberty track & field staff as an assistant coach ever since becoming the second Flames track & field athlete to be both an All-American and an Academic All-American during his own collegiate career. In January 2018, he was promoted to Associate Head Track & Field Coach.

Henderson, who coaches Liberty's throwers, has helped guide Flames to the NCAA Division I Outdoor Track & Field Championships during eight of his 12 years on staff. Most recently, Chelsea Igberaese (women's discus) and Denzel Pratt (men's javelin) both qualified for the 2019 NCAA national meet.

Certified as a Throwing Specialist by the USTFCCCA and as a Certified Strength and Conditioning Specialist (CSCS) by the National Strength and Conditioning Association (NSCA), Henderson earned an All-America certificate during his final college meet, the 2008 NCAA Division I Outdoor Track & Field Championships in Des Moines, Iowa. The senior recorded a third-place finish in the discus final, becoming the first thrower in Liberty history to win All-America recognition.

During his senior season of indoor track & field, Henderson qualified for the NCAA Division I Indoor Track & Field Championships, placing 14th in the shot put. He ended his career with three Liberty and Big South records, including indoor shot put (61-10.5), outdoor shot put (61-3) and discus (204-3).

Henderson, who graduated with a 3.72 grade-point average in kinesiology in May 2008, garnered many academic awards, headlined by a first-team ESPN The Magazine Academic All-America notation. He was additionally a two-time U.S. Track & Field and Cross Country Coaches Association (USTFCCCA) All-Academic team member and won two Big South Scholar-Athlete of the Year awards. Henderson was also presented with the inaugural Dr. Jerry Falwell Leadership award.

At Meadow High School, Henderson starred in both track & field and six-man football. He then began his collegiate career at South Plains College, under the direction of current Liberty Head Coach Lance Bingham. As a sophomore at South Plains in 2005, Henderson was a junior college All-American, after placing second in the discus at the NJCAA national meet.

Henderson married former Head Coach Brant Tolsma's daughter Brenda in June 2007, and the couple resides in the Lynchburg area. The Hendersons have three sons, Colton, Adrian and Abram, and a daughter, Cheyanne.