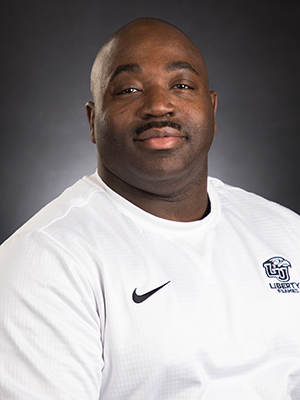 Andrew "Pete" McFadden serves on the Liberty track & field coaching staff, primarily working with the sprints (up to 800 meters) and relays.

After serving in a part-time role during the 2007 season, he is working full-time with the Flames for a 14th consecutive season in 2021 and was promoted to Associate Head Track & Field Coach in January 2018.

McFadden capped off a busy and successful 2019 season by serving as the USA Team's head track & field coach for the World University Games in Naples, Italy.

Along the way, the Lady Flames improved the 4 x 400 school record to an impressive 3:33.20. In total, nine of the 18 school records Liberty took down in 2019 came in events coached by McFadden.

The 2018 ECAC indoor team title was one of many highlights during arguably McFadden's finest coaching season to date. His athletes excelled on international, national, regional, conference and historical levels.

Olympian Alejandro Perlaza Zapata set both the South American indoor men's 400 record (46.14) and the Colombian outdoor men's 400 record (44.86) during his first season with the Flames. Meanwhile, Tanner Ealum raced to the world's No. 4 women's 500 time of 2018, 1:11.17. At season's end, McFadden traveled to Perlaza Zapata's home continent as an assistant coach for the USA team at the inaugural 2018 FISU America Games in Sao Paulo, Brazil.

In 2009-10, McFadden helped coach Jaime Watson to one of the finest seasons in school and conference history in the 400 and 800. She broke numerous Liberty and Big South Conference records and qualified for the 2010 NCAA Division I Indoor Track & Field Championships.

McFadden was a standout sprinter for the Flames in the mid to late 90s and held the Big South Championship meet record at 100 meters (10.32) until 2010. In 1996, he led off for Liberty's victorious 4 x 100 meter relay squad at the IC4A Championship, helping the Flames capture the team title. The quartet ran a school-record 39.86 seconds. In total, he was a six-time All-East selection at 100 meters, 200 meters and in the 4 x 100 relay.

McFadden also excelled on the football field at Liberty. He played for the 1995 Flames who went 8-3 and were ranked No. 19 nationally. That season, McFadden returned two kickoffs for touchdowns and averaged a school-record 37.8 yards per return. His 93-yard punt return against Delaware State is still a school record. At season's end, he was named a first-team All-American as a return specialist by both the Football Gazette and the Sports Network.

McFadden participated in the Indianapolis Colts' 1998 preseason training camp, but was released just before the team's last cut. He then spent the 1999 season with the Portland Forest Dragons of the Arena Football League.

In addition to his position on the Flames' coaching staff, he works part-time with troubled youth in Lynchburg as a home-based therapist. He also works with an inner-city youth group at Power of God Deliverance Church in Lynchburg and founded an organization called Dream Again Life, which teaches children the importance of being educated, while also motivating them to chase after their dreams.