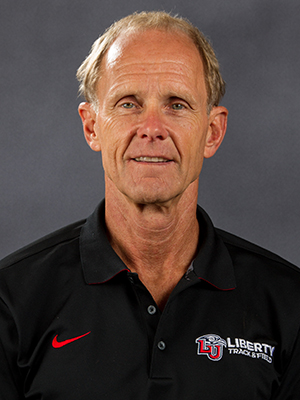 Brant Tolsma, Liberty's Director of Track & Field and Cross Country, wrapped up his 34th year coaching the Flames in 2019-20. During his three-plus decades on campus, Tolsma led Liberty to an amazing amount of success at the national and conference levels.

Tolsma announced his retirement on Feb. 29, 2020, after the Flames and Lady Flames swept the team titles at the ASUN Indoor Track & Field Championships at the Liberty Indoor Track Complex. That proved to be the final meet he coached, as the 2020 outdoor track & field season was cancelled due to the COVID-19 virus.

The summer of 2018 was an exciting one for Tolsma, who was chosen as the head coach of the USA Team for the inaugural FISU America Games in Sao Paulo, Brazil.

Individually, Sam Chelanga closed his career in 2011 with a total of four NCAA national titles, including two apiece in cross country and outdoor track & field. Additionally, Heather (Sagan) Zealand won the mile at the 2002 NCAA Division I Indoor Track & Field Championships and Josh McDougal was the national champion at the 2007 NCAA Division I Cross Country Championships. Tolsma was at the helm for each of the Flames' six individual national titles.

Chelanga's performance at the 2011 NCAA Division I Outdoor Track & Field Championships, which included a 5K national championship and a runner-up finish in the 10K, helped Liberty tie for 12th place in the final men's team standings. That is the highest NCAA Division I team finish in program and Big South Conference history in either cross country or track & field.

Tolsma's student-athletes also excelled in the classroom during his tenure at Liberty. Twelve Liberty cross country/track & field student-athletes earned CoSIDA Academic All-America honors at the Division I level under his guidance.

Tolsma has published several articles about track & field training and in 2001 released a book, The Surrendered Christian Athlete, which expounds the role of the Christian faith in athletics. He has also designed several athletic training devices.

During September 2010 at the Matthes-Hopkins Track Complex, Tolsma set the world record for men aged 60 and over in the double decathlon, a two-day, 20-event competition which includes all of the track & field disciplines. In October 2007, Tolsma broke his age group's world record for the one-day double decathlon. Tolsma also set an age group (55-60) world record for the double heptathlon in December 2008, while competing at Liberty's former indoor track & field facility bearing his name (Tolsma Indoor Track Center).

The former president of the International Association of Ultra Multi-events, Tolsma has raced nearly every competitive distance from 50 meters to 50 miles.  The latter he did to celebrate reaching age 50.

Tolsma enjoys a number of sports and fitness activities, especially water-skiing. His wife Nancy is the mother of his six children: Michelle, who is married to former Liberty tennis player Matthew Schley; Rachel Parker; Brenda, who is married to current Liberty associate head track & field coach Clendon Henderson; Regina Hurst; Joey and Tami Acree, a four-year member of the Liberty women's track & field team who graduated in May 2012.  Tolsma also has 16 grandchildren as of 2020.