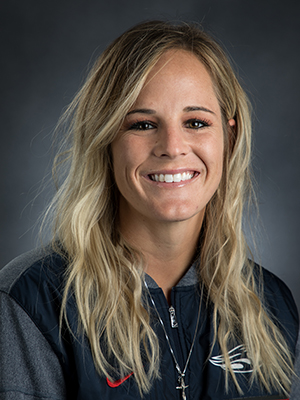 Paige Cassady joined the Liberty softball coaching staff in July 2013 and was promoted to her current role of associate head coach in August 2018 by head coach Dot Richardson. She primarily focuses on the development of the Lady Flames' pitching staff.

Cassady received national recognition in 2018, when she was named the NFCA National Assistant Coach of the Year.

She has helped Liberty post five wins over Top 25 opponents, including victories over No. 21 Ole Miss and No. 6 Michigan in 2020. Liberty's win over No. 6 Michigan on Feb. 23, 2020 tied the highest-ranked opponent Liberty has ever beaten in softball. The Lady Flames also posted their first two NCAA postseason wins in 2018, beating Hofstra and South Carolina in order to make the program's first NCAA Regional final appearance.

Cassady's pitching staff improved in ERA in each of her first six years as pitching coach. Cassady has guided the pitchers to some of the best seasons in program history. Under her tutelage, Julia DiMartino (2016-19) set program career records for wins (87), winning percentage (.679), shutouts (30), saves (15) and strikeouts (761), while in 2018, DiMartino broke program single-season records for wins (29), shutouts (10), saves (6) and strikeouts (230).

During 2019, Liberty posted 19 shutouts and two no-hitters, including a perfect game by Julia DiMartino. The Lady Flames finished the season ranked fifth nationally with a 1.60 team ERA. DiMartino (8th, 1.20 ERA) and Chase Cassady (24th, 1.50) both finished in the top 25 in the nation in ERA. Liberty, along with national finalists Oklahoma and UCLA, were the only three NCAA Division I teams with two pitchers in the top 25 nationally in ERA. Liberty posted program record streaks of nine consecutive shutout games and 60 straight shutout innings (Feb. 21 through March 8).

In the 2018 season, she led the Liberty staff to another dominant season, posting a 2.04 ERA and 19 shutouts, one shutout shy of the program record of 20, set in 1999. Four different Lady Flames (Julia DiMartino – program-record 10; Chase Cassady – 5; Elizabeth Engler – 2; Emily Kirby – 1) posted at least one shutout. In the final 23 games of the season, Liberty recorded a 0.97 ERA as a team. For the second year in a row, Julia DiMartino was named Big South Pitcher of the Year, while Chase Cassady was voted second team all-conference. The Liberty coaching staff was named the 2018 NFCA Mid-Atlantic Regional Coaching Staff of the Year.

The 2018 Lady Flames had a record-setting season, going 49-14 and 18-3 in Big South play, winning the Big South regular-season title for the second year in a row. The Lady Flames claimed the Big South Softball Championship title by sweeping through the conference tournament. Then, Liberty won its first two games at the NCAA Columbia Regional, upsetting No. 24/24 Hofstra and No. 10/11 South Carolina to advance to the Regional final. At the end of the season, Liberty received a program-record 17 votes in the final NFCA Top 25 Poll, while holding a program-best RPI of 29.

Cassady coached Liberty's pitchers to a program-record-setting 377 strikeouts in 2016, as the team led the Big South in both strikeouts and shutouts (12). The 2016 Lady Flames' staff finished with a 3.00 team ERA. DiMartino was named to the Big South All-Conference first team, setting new program freshman records with 17 wins, a conference-best seven shutouts, 187 strikeouts and two no-hitters.

During her second season, Cassady guided a Lady Flames' pitching staff which posted seven shutouts and finished third in the Big South with a 3.63 team ERA. Under her guidance, Chandler Ball was named to the 2015 Big South All-Conference team, Liberty's first all-conference pitcher since 2011. Additionally, Ball went 20-11, tying for the second-most wins by a Lady Flame in a single season in program history.

Before joining Liberty's coaching staff, Cassady served as pitching coach at Lipscomb under head coach Kristin Ryman in 2013. While at Lipscomb, Cassady helped the Lady Bisons post a 35-24 record and qualify for the Atlantic Sun finals. During the 2013 campaign, she instructed Tanner Sanders, who was named to the Atlantic Sun All-Freshman team and Conference Tournament team. She was in charge of infield defense and baserunning, in addition to responsibilities for travel, camps, team academics and recruiting.

Prior to her time at Lipscomb, Cassady spent two years as a graduate assistant at Louisiana Monroe, where she was the pitching coach under head coach Rosemary Holloway-Hill. In addition to her pitching instruction responsibilities, she directed the Warhawks' baserunning practice and developed speed and agility workouts.

Cassady has gained extensive experience as a pitching instructor. Since 2005, she has joined her father with Powerline Fastpitch, to provide pitching lessons in and around the Orlando, Fla., area. Several of her students have gone on to pitch collegiately. She has also served as an instructor at FIU softball camps and clinics and at a softball camp led by LSU softball head coach Beth Torina.

While working at Louisiana Monroe in Nov. 2012, she served as a keynote speaker on the fundamentals of pitching at an annual Easton Fastpitch southeast conference in Mississippi.

A native of Orlando, Fla., Cassady pitched collegiately for four seasons, beginning with a two-year stint at Presbyterian College from 2007 and 2008. As a freshman in 2007, Cassady won 16 games and was named to the All-SAC second team. Following the 2008 season, she transferred to Florida International, where she was a team captain in 2010.