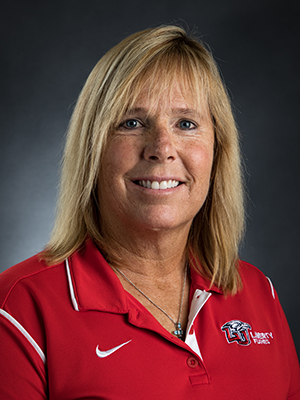 Dot Richardson was named the fifth head coach in the history of the Lady Flames softball program on July 17, 2013.

Richardson has guided the Lady Flames to five wins over Top 25 teams, including victories over No. 21 Ole Miss and No. 6 Michigan during the 2020 season. Liberty's win over then No. 6 Michigan on Feb. 23, 2020 ties the highest-ranked opponent Liberty has ever beaten in softball. The Lady Flames also posted their first two NCAA postseason wins in 2018, beating Hofstra and South Carolina in order to make the program's first NCAA Regional final appearance.

In 2019, Richardson helped Liberty make an immediate impact on the ASUN Conference, as the Lady Flames went 40-22 overall and finished second in conference standings at 16-5. The Lady Flames claimed their second NISC Regional title in the last three years, not allowing a single run in winning the Lynchburg Regional. Liberty opened the season ranked No. 22 in the Softball America Poll, the team's first time appearing in the Top 25.

The 2018 Lady Flames had a record-setting season, going 49-14 and 18-3 in Big South play, winning the Big South regular-season title for the second year in a row. The Lady Flames claimed the Big South Softball Championship title by sweeping through the conference tournament. Then, Liberty won its first two games at the NCAA Columbia Regional, upsetting No. 24/24 Hofstra and No. 10/11 South Carolina to advance to the Regional final. At the end of the season, Liberty received a program-record 17 votes in the final NFCA Top 25 Poll.

Richardson was named 2017 Big South Softball Coach of the Year, the same season she coached the Big South Freshman of the Year (Amber Bishop), Big South Pitcher of the Year (Julia DiMartino) and Big South Scholar-Athlete of the Year (Kenzie Friesen). She also coached four players to NFCA All-Region mention.

In 2016, she led the Lady Flames to a 31-28 record, the team's first 30-win season since 2011. The 2016 Lady Flames also finished third in the conference with a program-record 16 Big South victories. Liberty posted a conference-leading 12 shutouts and a program single-season-record 377 strikeouts.

Richardson guided the Lady Flames to an 18-win improvement over the previous season in 2015, the largest improvement in NCAA Division I softball from 2014 to 2015. During Richardson's second season at the helm, 2015, the Lady Flames went 29-30, a season highlighted by wins over Arkansas, Virginia Tech and Virginia. Her first collegiate coaching victory came Feb. 15, 2014, a 5-1 win over Norfolk State.

Under Richardson's direction, Megan Robinson was twice named to the CoSIDA Academic All-America team, including first-team mention in 2015. Robinson is the first Academic All-American in program history. Also, Alexia Taylor was named 2015 Big South Freshman of the Year, while Richardson has coached 18 all-conference players and 11 members of the Big South All-Freshman team.

Richardson brings a vast knowledge of the game, which she has shared during stints as both a coach and a clinician. She has coached at the collegiate level, including as an assistant coach at Adelphi University while completing her master's degree in 1988 and as a volunteer at Oregon State. Before coming to Liberty, Richardson served as an advisor/instructional coach for Montverde Academy's softball team.

She is the founder of the Dot Richardson Softball Association – a not-for-profit organization which provides instruction to coaches and athletes to help them reach their full potential. As part of this foundation, a travel ball organization was founded, with Richardson coaching "Dot's Diamonds" to NSA National Championships at both the 10U and 18U levels.

Through the Dot Richardson Softball Series, Inc., Richardson has organized and taught at instructional camps and clinics throughout the nation since its founding in 1984.

Richardson took over Liberty's head coaching position after Paul Wetmore retired from the position in May 2013. Richardson became the program's second head coach at the Division I level since the program was reinstated in 1994.

Richardson is considered one of the most decorated collegiate, national and international players in softball history.

She helped Team USA win Olympic gold in Atlanta in 1996 and Sydney in 2000, hitting the game-winning home run in the gold medal game in 1996.

While at UCLA, Richardson helped the Bruins win their first of 11 NCAA national championships in 1982. She finished as a three-time Bruin softball team MVP and completed her career with a .349 batting average.

The standout shortstop was named UCLA's All-University Athlete Award winner in 1983, sharing the honors with three-time Olympic track & field goal medalist Jackie Joyner Kersee. Additionally, Richardson was named the 1980's NCAA Player of the Decade to cap off her stellar collegiate accomplishments. She is listed No. 43 on the Top 100 NCAA Student-Athletes of the Century.

Richardson is a 16-time Amateur Softball Association (A.S.A.) All-American and was inducted into the A.S.A. Hall of Fame in 2006.

After retiring from the game of softball in 2000, Richardson has served as the Executive Director and Medical Director of the National Training Center in Clermont, Fla.

After graduating from UCLA with an undergraduate degree in kinesiology/pre-med in 1984, Richardson received a M.A. in Exercise Physiology/Health from Adelphi in 1988 and her M.D. from Louisville in 1993.

She completed a five-year post-doctoral residency in orthopedic surgery from the USC/Los Angeles County Medical Center (July 1993 to June 1999) and participated in an orthopedic sport medicine fellowship at the Kerlan-Jobe Orthopedic Clinic in Los Angeles, Calif., the following year.

An active member of the community during her time in Central Florida, Richardson was named the 2012 Citizen of the Year for Lake County, Fla. She also received the 2012 Summit Award from the Women's Research Center from UCF.

Richardson is married to Bob Pinto, the National Director of the Fellowship of Christian Athletes Softball Ministry. Richardson also serves in the organization as board chair.

Richardson has worked as a television commentator for NBC's coverage of the Athens Olympics in 2004 and helped cover numerous softball games, including the NCAA Softball College World Series, for ESPN.