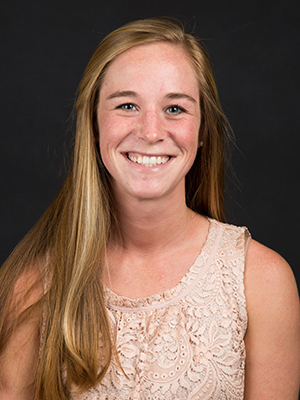 Melanie Spicer began in her role as Women's Olympic Sports Director of Operations in September 2017.

For budget planning and maintenance, Spicer assists with budget requests, sends updates on current budget standing, serves as the liaison between the Flames Club and the status for each sports' Flames Club Special Account Budget and confirms per-diem checks are received and correct.

Spicer graduated from Liberty in 2016 with a bachelor's degree in sport management while earning minors in both accounting and business. In August 2017, Spicer completed her Master of Business Administration (M.B.A.) degree from Liberty.

Spicer, formerly Via, was a member of the Liberty women's lacrosse program for five years (2013-17). In 2016, she earned Big South All-Conference honorable mention accolades. As a fifth-year senior in 2017, Spicer served as a team captain for the Lady Flames alongside Faith Wells.

A native of Blacksburg, Va., Spicer currently resides in Bedford, Va. with her husband, Jamison.