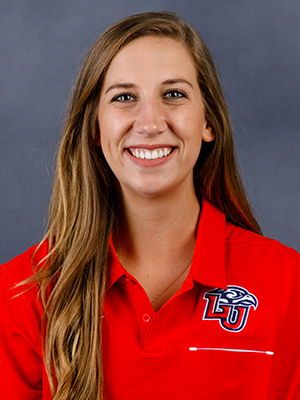 During her role as graduate assistant, Adams assists in all aspects of running a successful Division I program.

Adams comes to Liberty after a record-setting career at Wingate. A three-time all-conference selection, she holds Wingate's single-season records for both digs (674  in 2018) and digs per set (5.76 in 2018) while also collecting a program-record 2,060 digs during her career (2014-18). She helped the Bulldogs to NCAA Division II Elite Eight appearances as both a freshman and a redshirt senior. As a redshirt senior, she was named an AVCA All-Southeast Region honorable mention recipient. During her time at Wingate, the Bulldogs won three SAC regular-season championships (2014, 2015, 2018) and three SAC tournament titles (2014, 2016, 2018).

She coach at Carolina Union Volleyball Club (CUVC) in Charlotte, N.C., during the 2017 and 2018 club seasons. During 2018, she led master training practices, directed camps and clinics, coordinated practices, drills and skill development and assisted with planning and scheduling practices.

A native of Clayton, N.C., Adams currently resides in the Lynchburg area.