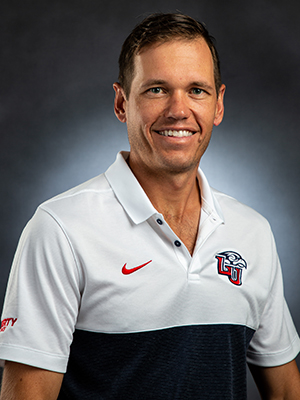 Since taking over the program, Schwandt has led the Flames to back-to-back 12-win seasons in his first two years and a 10-4 combined mark in conference play (6-1 ASUN, 4-3 Big South).

In 2019, Schwandt led the Flames to a 6-1 mark in the ASUN in their first year in the league. Liberty started 5-0 in conference play for the first time in school history. Schwandt and the Flames earned the No. 2 seed for the ASUN Men's Tennis Championship. Liberty also played a challenging non-conference slate which included matches against Penn, Princeton, Washington, Virginia Tech and VCU among others.

Schwandt instructed ASUN Men's Tennis Player of the Year, NCAA Singles Championship participant and ASUN All-Conference first team member Nicaise Muamba in 2019. Muamba was also a four-time ASUN Player of the Week and was listed among the top-125 singles players in the country in the 2018-19 Oracle/ITA Division I Men's Collegiate Tennis Rankings seven times during the spring season. He also coached ASUN Freshman of the Year and ASUN All-Conference first team selection Josh Wilson and ASUN Scholar-Athlete of the Year and ITA/Arthur Ashe Leadership & Sportsmanship Award winner Chase Burton.

Schwandt has also fostered academic success, as the Flames were named a 2018 ITA All-Academic Team and had five players named to the ITA-Scholar Athlete team.