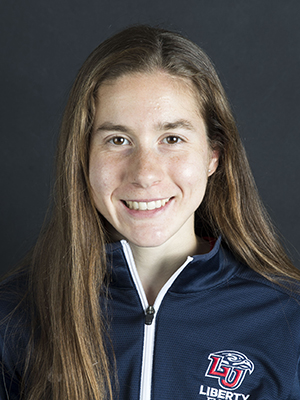 2018 Outdoor Track & Field (Fr.)
• Placed 18th overall (third among freshmen) in her NCAA East Preliminary Round 10K debut, thanks to a season-best and Big South-leading time of 34:41.02
• Finished well in the 5K at both the Big South (second place) and USATF Junior Championships (fourth)
• Her personal-best 16:28.13 5K at the Virginia Challenge set a Liberty freshman record and was the fastest time by a Big South runner in 2018
• Fastest 1,500 of the year was 4:38.69 at the FSU Relays
• Earned a silver medal in the 5K at the FISU America Games in Brazil
• USTFCCCA All-Academic Team
• Big South Presidential Honor Roll member

2017 Cross Country (Fr.)
• Finished first on the team in four of her six races, including the season-ending NCAA Division I Southeast Regional Championship (126th place)
• Came in 27th at the Big South meet
• Big South Women's Runner of the Week on Oct. 4 after placing fourth in the Paul Short Run Brown Division I race.
• Her 6K time of 21:25 at the Paul Short Run ranks No. 2 among freshmen in program history
• Also paced the Lady Flames at the Liberty Big South Preview (second place) and in the Pre-Nationals Black Race (57th place)