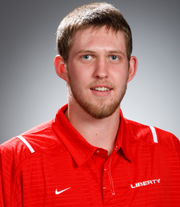 2009 (Fr.): Appeared in five games on the year, before sitting out the remainder of the season with a stress fracture in his right leg ... tallied a season-high six points at UNC Asheville (11/18) … received medical redshirt.
Prep: 2008 graduate of Grace Baptist Academy … 2008 McDonald's All-American nominee … earned the Wendy's Heisman Award … ranked by ESPN.com as the No. 34 ranked power forward in the class of 2008 … averaged 15.0 points, 10.0 rebounds and 5.0 blocks per game as a senior … averaged 14.0 points, 11.0 rebounds and 5.0 blocks per game as a junior, helping his team to the regional finals … the all-state honoree altered the game, evident by his 20 shots redirected during his junior year.
Personal: Son of Tommy and Melinda McMasters … birthday is May 11 … majoring in pre-med … career objective is to be a pediatrician … father played at Tennessee Temple under Ron Bishop.