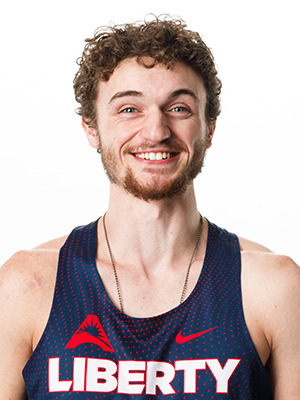 2018 Outdoor Track & Field (So.)
• Claimed his first Big South medal with a third-place pole vault finish
• Cleared a personal-best 16-5.25 in the Mount Olive Final Qualifier pole vault, four days after the conference meet. That earned him a spot in Liberty's all-time top 10 and just missed qualifying for the NCAA Division I East Preliminary Round meet.
• Won the open section of the Virginia Challenge pole vault at 15-9.25
• Joined the 16-foot club with a 16-1.75 clearance during the Liberty Twilight Qualifier

2017 Outdoor Track & Field (Fr.)
• Finished seventh in the Big South pole vault final
• Broke through for a 15-5 pole vault clearance at the Liberty Collegiate Invitational, before improving to 15-6.5 at the Virginia Grand Prix

2016-17 Indoor Track & Field (Fr.)
• Did not compete in any meets for Liberty and was redshirted
• Competing unattached, pole vaulted a season-best 14-9 for 11th place at the Liberty Elite Invitational

Prep
• Graduated from Liberty Christian Academy
• Pole vaulted 14-9 as a senior, after only picking up the event the previous year
• 2016 Virginia 4A outdoor state champion in the pole vault and runner-up in the 4 x 400 relay
• At the 2016 Virginia 4A indoor state meet, placed second in the pole vault, fifth in the 4 x 200 and sixth in the 4 x 400
• Helped his team win Virginia 4A state championships in boys' indoor and outdoor track & field in 2016, their first year as a VHSL member