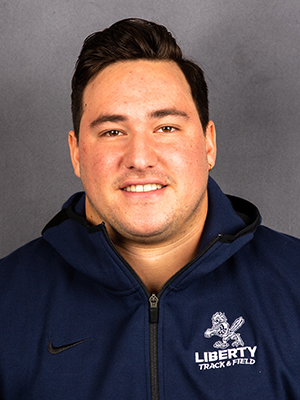 2020 Indoor Track & Field (R-Jr.)
• Heaved the shot put a personal-best 59-0 for fourth place in the ASUN final
• Improved his shot put distance at each of his last four meets of the season, going from 57-1.5 at the season-opening Virginia Tech Invitational to 59-0 at the ASUN Championship

2019 Indoor Track & Field (R-So.)
• Posted top-three finishes in all six of his shot put competitions, headlined by the ASUN title (meet-record and personal-best 58-8.5)
• IC4A shot put runner-up
• Named ASUN Men's Field Athlete of the Week on Jan. 23 & 30 after opening his Liberty career with a third-place shot put finish at the Hokie Invitational and a victory at the Liberty Kickoff

Prep
• Graduated from Colegio Monte Tabor
• Represented Chile at the 2014 Youth Olympic Games and the 2016 IAAF World U20 Championships
• Set a national under-20 men's discus record (187-6)
• Placed fifth in the discus and seventh in the shot put at the 2017 South American Championships
• Top marks with senior implements include 182-2 for the discus and 56-8.5 for the shot put