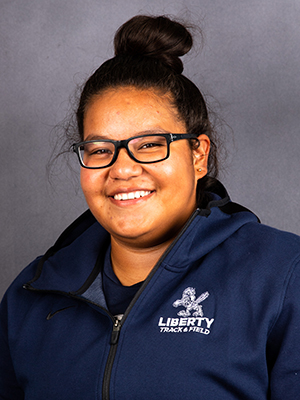 2019 Outdoor Track & Field (So.)
• ASUN shot put champion (meet-record 50-5.25) and hammer runner-up (personal-best 185-8)
• Threw the shot put at the NCAA Division I East Preliminary Round meet for the second year in a row
• Her winning shot put mark of 52-3.75 at the FSU Relays broke her own program record and took down the ASUN all-time standard
• Won a total of four shot put competitions on the year, also including the Jim Settle Spring Break Invitational and Gamecock Invitational
• Made incredible progress in the hammer throw, going from 152-8 at the Jim Settle Spring Break Invitational to 185-8 at the ASUN meet less than two months later
• Opened the outdoor season with back-to-back ASUN Women's Field Athlete of the Week honors on March 20 & 27
• During the summer, placed second in the shot put at the Mexican Championships and fifth at the NACAC U23 Championships in her hometown of Queretaro

2018 Outdoor Track & Field (Fr.)
• Won the Big South shot put title with a Liberty and conference-record 52-3.25 effort
• Came in 21st in her NCAA Division I East Preliminary Round shot put debut, including third among freshmen
• Took seventh place in Section A of the women's shot put at the Texas Relays