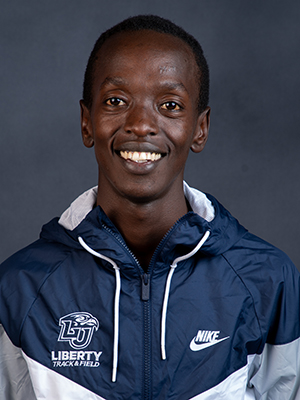 2018 Outdoor Track & Field (Jr.)
• His lone 5K of the season resulted in a time of 14:19.61 for third place in the Big South final
• For the second straight season, placed 13th in the NCAA Division I East Preliminary Round 10K, one spot away from qualifying to Eugene
• After missing two and a half months of competition due to injury, returned with a season-best 29:27.40 10K for third place at the Virginia Challenge
• USTFCCCA All-Academic Team
• Big South Presidential Honor Roll member

2017-18 Indoor Track & Field (Jr.)
• Recorded three straight personal bests before suffering a season-ending injury
• Opened his year with a personal-best 4:11.87 mile clocking (No. 8 all-time at Liberty) at the Liberty Kickoff
• Improved his 3K best to 8:07.04 on a 200-meter flat track at the Camel City Invitational, ranking No. 4 on the Flames' all-time list
• Ran a lifetime-best 13:55.74 5K at the Iowa State Classic. Only NCAA national champions Sam Chelanga and Josh McDougal have ever run faster as Flames.

2017 Cross Country (Jr.)
• Earned his first All-America honor with a 25th-place finish at the NCAA Division I Cross Country Championships, becoming Liberty's first men's cross country All-American since 2010
• Came in third at the NCAA Division I Southeast Regional Championships in a 10K time of 28:57.0 which ranks him No. 2 in program history and earned his first all-region medal
• Big South runner-up
• Pre-Nationals fourth-place finisher with an 8K time (23:11.4) which ranks No. 3 in program history
• Named Big South Runner of the Week on Oct. 4, following his Paul Short Run runner-up finish
• Won his first collegiate cross country individual title in the first race ever held at the Liberty Cross Country Course, the Liberty Big South Preview

2016 Cross Country (So.)
• Saved the best two races of his sophomore season for the two biggest meets
• Placed fourth at the Big South Championship (second on the team), improving one spot from the 2015 Big South meet
• Finished a career-best 31st at the NCAA Division I Southeast Regional Championship (second on the team), lowering his 10K personal best to 30:16.6 in the process and helping the Flames finish ninth as a team

2015 Cross Country (Fr.)
• Came in fifth overall, including second on the team and second among all freshmen, at the Big South Championship for All-Big South honors
• 11th-fastest freshman at the NCAA Division I Southeast Regional Championship, where he finished 68th overall
• Liberty's No. 1 runner at each of his first three collegiate races (UVa Duals, Virginia/Panorama Farms Invitational and Pre-Nationals black race)
• UVa Duals runner-up, earning Big South Runner of the Week honors on Sept. 9
• Placed 28th at the Virginia/Panorama Farms Invitational and 10th in the Pre-Nationals black race, leading the Flames to the Pre-Nationals team title
• 8K time of 24:15.1 at Pre-Nationals was the fastest by a Flame in 2015