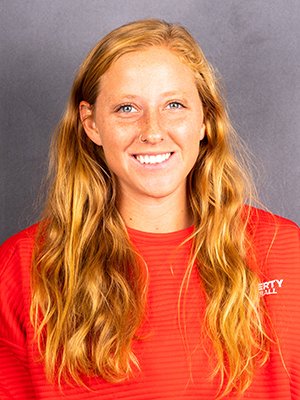 2019 (Jr.)
• Played in and started all 62 games at first base
• USA Softball Player of the Year Top 50 Watch List
• Preseason ASUN Player of the Year
• ASUN All-Conference first team first baseman
• Named ASUN Player of the Week on April 22
• Listed as No. 80 on Softball America Top 100
• NISC All-Tournament Team (both Regional and National rounds)
• Batted .352 with eight doubles, two homers, 32 RBI, 35 runs and led the team with 29 walks and a conference-best .459 on-base percentage
• Recorded 17 multiple-hit games, including two three-hit games and one four-hit contest, and nine multiple-RBI contests
• Her 13-game hitting streak from April 2-20 was the longest by a Liberty player this season
• Opened the season with a 3-for-5 game against BYU (Feb. 8), driving in one run and scoring once
• Tied her own program single-game record with two sacrifice flies against Rutgers (Feb. 17)
• Batted 4-for-5 with two doubles and two runs scored in nine-inning win at Duke (March 27)
• Had back-to-back two-hit games at North Florida (April 14) and at Virginia (April 16)
• Went a combined 4-for-5 with a double, four RBI and three runs scored in doubleheader sweep of Jacksonville (April 20)
• Hit 3-for-3 with two RBI against Longwood
• Batted 2-for-2 with two RBI and one run scored in NISC Regional Final win over Marshall
• Her first two homers of the season came in the NISC National Round opener against UT Arlington, as she batted 2-for-2 with a career-high five RBI and three runs scored
• Named to ASUN Honor Roll

Personal
• Daughter of James and Elizabeth Haney
• Graduated with Bachelor's degree in exercise science, with the career goal of becoming an occupational therapist for military veterans
• Twin sister, Amber Bishop, is a senior on the Liberty softball team
• Birthday is Feb. 14